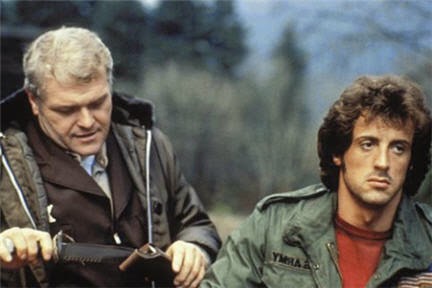 The very first Rambo movie (First Blood) is set in Washington State, in a fake town called Hope. Filmed in the actual Hope, British Columbia, the setting is descended from a fictional town in Kentucky in the original First Blood book, which in turn is based on a Pennsylvania town.

Both the fictional Kentucky town and actual Pennsylvania town are deep in Appalachia. Which, given the deep Appalachian roots in rural western Washington, Hope fits.

It also fits in the parallel I draw between the Rambo character and John Tornow. There is so much written about Tornow (some very recently), I've always wondered what the fascination was. Tornow, at least on the surface, doesn't reveal any greater truth. Unbalanced man either murders or is accused of murder. People chase him down, a few deaths later, he gets killed.

But, if you look at Tornow through the lens of Rambo, you see something deeper. It lets you look back on the society that is turning its violence onto these men. For Rambo, he's a recently returned Vietnam veteran targeted as a vagrant by an evil small town cop.

For the Appalachians in Grays Harbor in the early 1900s, for the Appalachians at every step in First Blood, the wild men are too far gone from society to live. They murdered, they are outside the bounds of even the libertarian Appalachian societal rules. Every man has liberty, but there is only so much liberty.

Both Tornow and Rambo are also both experts. Rambo is a highly trained commando, the cops that come after him are hopeless against his killing skills. He seeks to come back into society, but he falls back onto his training and the war.

Tornow was an actual outdoorsman, more at home (according to biographers) than in a town or among society. He was able to live off the land while being hunted for over a year and a half, feeding himself with what he had around him in the deep woods.

And, that is what I think is the larger truth about Tornow. If the Scots-Irish, the genetic base of the Appalachian DNA had finally run out of new territory to conquer in Cascadia (also explored in Sometimes a Great Notion), then they were almost ready to run down the last Wilderness. Tornow was a representative of that wilderness.

Sure, Appalachians are much more libertarian, every-man-for-himself than other sorts of North American society. Rules don't necessarily work for them, but they are also the shock troops of a larger society against the wilderness, or agains the native inhabitants.