Halfway there to a soccer specific stadium down here, maybe a new one at Evergreen?

The soccer field next to the big big hill (Field 1) at the Regional Athletic Center in Lacey is about as close as we get to a soccer specific stadium in Thurston County. It has lights and seating for a large crowd (on a grassy hill). But, it lacks a locker room and any area for media coverage.

But, now in new drawings of what Evergreen's CRC might look like after a major expansion of Evergreen State College's recreational facilities, we have the makings of a proto soccer specific stadium. 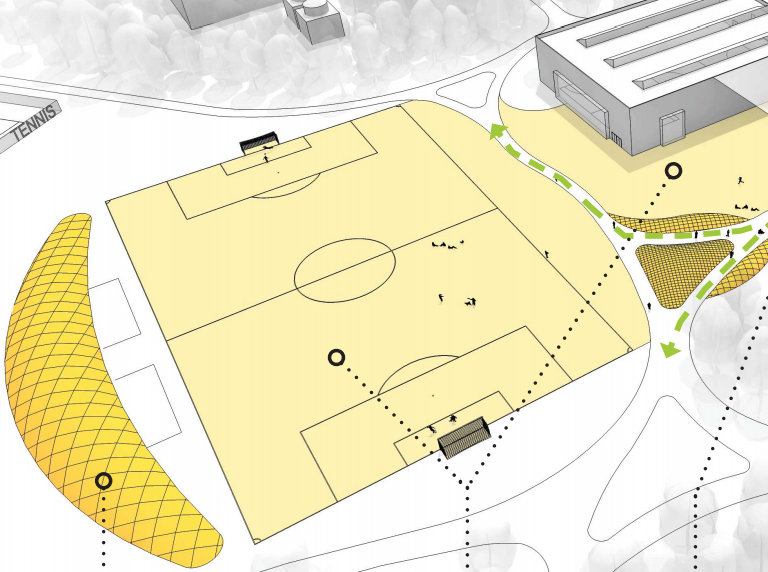 The field would be synthetic, so we'd have a year round, all weather surface.

Like the RAC, this field would also have a berm, at least allowing for larger crowds. This certainly isn't a typical stadium, which would include at least bleacher seating and possibly be covered. But, heck, it isn't nothing.

Also, since the field is directly next door to the CRC proper, semi-pro and high level amateur teams would have access to locker rooms.

The only thing this field would lack that the RAC would have would be lights.

Also, I assume (and this is where I'm headed) if we wanted an EPLWA, PDL or NPSL team, that some sort of gate would be needed. Because, hard to run a team (even a high level amateur team) if you can't charge admission, right? Am I wrong?

So, in the end, the drawings sure look nice. But, before we get anywhere, the funding of the CRC renovations (and there are a lot more in addition to the new field) have to be funded. The money will be coming from the students at Evergreen, so we'll see if they end up voting in the changes.