Someone got a fake letter published in the Olympian yesterday under the name of a t.v. character. But, that's not even the worst thing 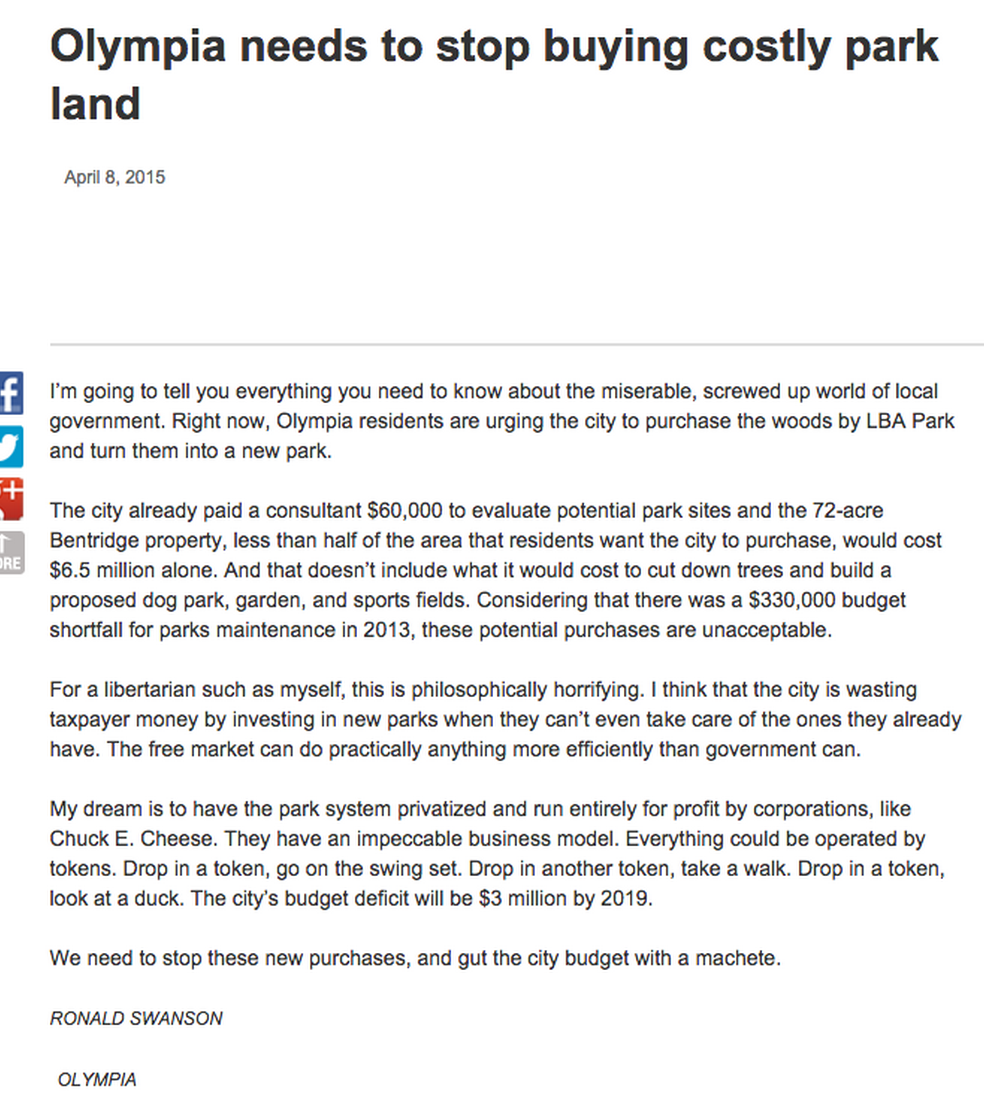 Yesterday, the Olympian published a letter to the editor written under the name of Ronald Swanson (google cache version is still up). On reflection, it was a pretty blatant joke that I should've gotten at first blush. I watched Parks and Recreation, but the entire Chuck E Cheese token joke I forgot.

When I read it first thing in the morning yesterday, I didn't pause. Dumb letter, I thought, then moved on. It wasn't until later in the day when I saw other people reacting to joke that it dawned on me.

So, that it got past the few people left at the Olympian doesn't surprise me. People complaining about parks is pretty common chatter here, as I assume it is in most cities like us.

Meta took a tour of the empty newsroom at the Olympian recently:


The bad news becomes apparent as one walks past the front desk and down the main hallway to reach the newsroom. First, there is a large nook with two desks, facing into the hallway as if to welcome visitors into a major customer service hub, but now abandoned. Then behind those desks is another room with row after row of cubicles, about 30 or more, containing nothing but some cleaning supplies, folding tables, recycle bins, and other bric-a-brac in need of a storage space.

That’s the top floor. The bottom floor was once the print shop, but it sits empty too, as all the printing is now done in Tacoma.

At the end of that main hallway, a sign on the wall offers directions to passersby. Three of the arrows on the sign point toward the empty room on the top floor (“advertising,” “production,” and “online”), two point to the empty bottom floor (“circulation” and “production center”), and only one to an occupied space (“newsroom”).

Clearly, while The Olympian has more local staff than some outsiders might realize, they have many fewer than they had in their heyday.

So, what I'm saying is that its understandable. But, not the worst part.

Sam Reed's letter didn't just argue against the opinion of the previous letter, it had to clean up at least one factual error. That error was an election result in a nearby county just last November. I admit it wasn't regional news that Clark County passed a charter last November along the lines of a sensational murder.

But, it was a result that most civically inclined people I know noted. And, it was also a fact that would've taken less than five minutes to check.

We need to debate our own important issues here. A letter to the editor column is a bit of a ham-handed forum anymore, but it is still a vital one. And, the value of that public forum is lessened when we can't believe what is written there.

So your rooting for a big empty building, that used to have reporters, but now only has a few repeaters. Why?

I'm rooting for the people that work there. Because they're nice people and I wish the company itself was better. Newspapers are important.