The best US Open to be held in Pierce County this year isn't even that US Open. And, it is because it isn't big and expensive.

People getting kicked out of their homes so landlords can make a windfall.

The county that spent millions of dollars on the venue is giving a tax windfall to their more metropolitan neighbors.

And, when it all comes down later this summer, Piece County will still be in debt over their new golf course.

The US Open Golf tournament, though the most laudable of golf's big tournaments because of its open format, is really just another television sporting event. The last time an amatuer won the US Open was 1933.

Sure, you may really like golf. This tournament in particular might excite you. I can't argue about that. And, I've argued in favor of government spending on sporting venues when I know in my brain that they don't make a return to taxpayers or the economy.

Mostly because I think team sports is important in setting a civic identity (so this golf stuff is something totally different for me). 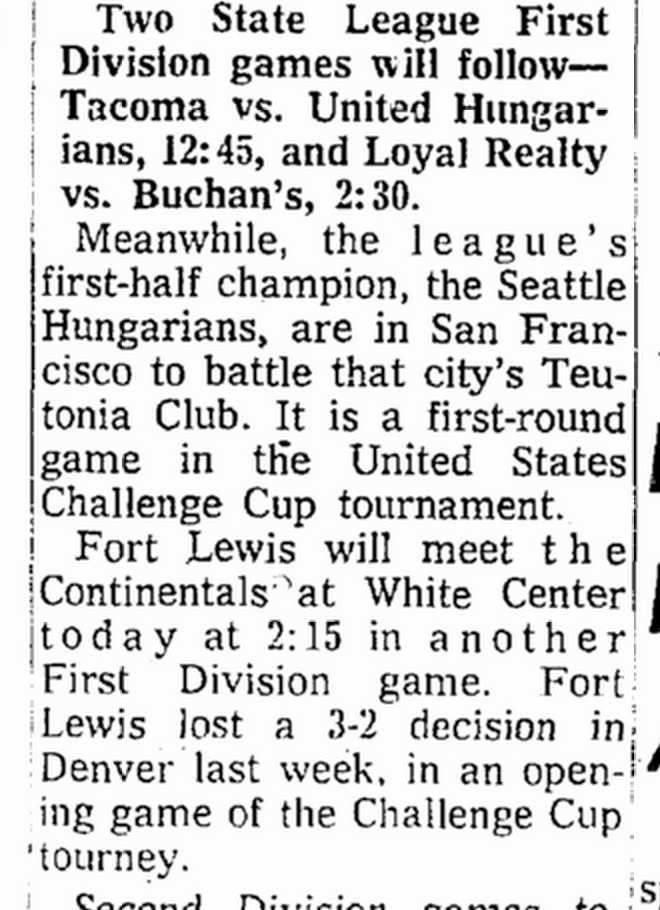 On May 13, Tacoma 253 (a brand new team) will face off with the Kitsap Pumas at Mt. Tahoma High School in the first round of the Open Cup. The winner will face off against the Sounders 2 in Tukwila a week later.

I've made a habit of trying to get to as many US Open Cup matches as possible. I've been to Sumner, when Dox Italia lost to the Sounders U-23s. I was in Bremerton when the old USL Timbers beat the Kitsap Pumas. I've been up at the tiny Starfire Stadium in Tukwila to watch the Sounders beat everyone there. And, I've been to two finals in Seattle.

Every year during the first few rounds of the Open Cup, soccer pundits seems to fuss around about how we finally make the US Open Cup matter. While I think this is an important discussion, I think it isn't the fault of the tournament. Its more of a function of how adult club soccer works on the lower levels than the tournament.

Tacoma 253 is literally a brand new team in Pierce County and (as far as I can tell) won't even play more than two games near Tacoma this year. And, this doesn't seem to be a rare thing in lower level adult soccer. There's a lot of flux right now. What the tournament, and possible fans of lower level teams, is stability.

Once we've gotten attachments to these clubs, the tournament that involves so many of them, will grow.

And, grow the right way. Because I'm absolutely fine with it the way it is. And, what it is is something totally different than the US Open golf tournament. The games aren't televised (except for usually the final). I love jamming through and early round night, flipping from internet stream to internet stream, following the action across the country.

I remember one particular night, when I watched the Atlanta Silverbacks play Georgia Revolution being webcast by someone literally holding up a cell phone in the stands. That same night Cal FC (an amatuer team from southern California) blasted the professional (but minor league) Wilmington Hammerheads 4-0. The next round Cal FC upended Portland Timbers 1-0 for a legendary upset.

And, it was all watched by hardcore soccer fans via internet stream.

This is what is beautiful about the US Open Cup. Small high school stadiums, shaky internet streams, live tweeting games not on the internet, rockus upsets by amateurs. Let's not make this real US Open different, bigger, more televised. Let's keep it small and dirty. If it gets bigger, its because the teams are more connected, not because there is more sponsorship money.
Posted by Emmett at 4/13/2015 05:58:00 AM