Downtown is a donut hole filled with subsidized housing (according to the maps). How'd we get to this point?

Here's my donut hole of Olympia population post from a little while back. I observed:

There might not be a lot of people living downtown compared to other parts of the city, but take a look at this map that Brian Hovis put together this week: 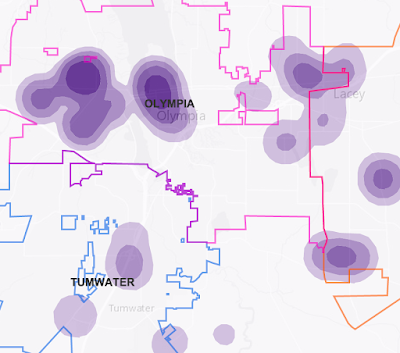 The density in west Olympia may increase soon. A new subsidized housing site is being planned near Yauger Park. The Copper Trails Apartments will add 260 more units to west Olympia, according to data from The Department of Commerce. Also recently reported in The Olympian there are proposals for new subsidized housing for the Drexel House and conversion of the Holly Motel.

Brian is pointing out something here that we have pretty much accepted around here as true, but seeing it in maps is really pretty cool.

I'm wondering about the history of this phenomena. If there's anything to understand about the apparent emptying out of downtown as a residential neighborhood. And, if the replacement of what we call market rate housing now with subsidized housing has any particular historical narrative.

Downtown Olympia obviously went through a transition in the late 70s and early 80s. I'm wondering if the mix of housing also shifted during those years and what forces were at hand.
Posted by Emmett at 6/25/2015 05:38:00 AM