Did E.J. Zita repeat Sue Gunn? No, she did not

Go right to the map. 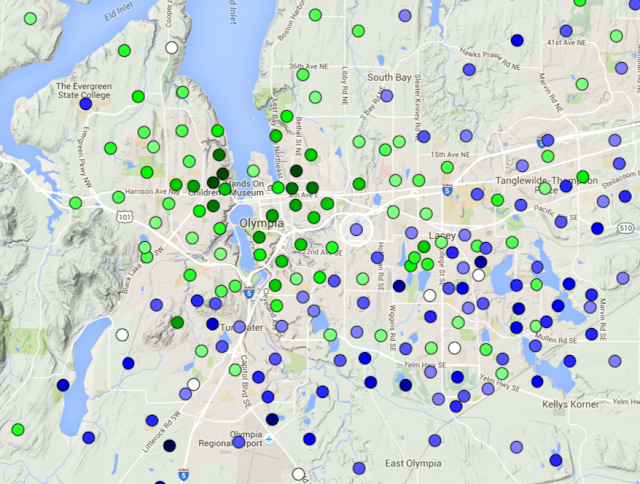 A couple of years ago, I drew a map showing how former port commissioner Sue Gunn did an amazing job connecting anti-establishment voters in the rural and urban neighborhoods.


She had the ability to run as a non-partisan, showing then how you could connect the bottom ends of the so-called (by me) Cascadian Political Spectrum. Typically, partisan elections in Thurston County roll out with the more liberal (Democratic) candidate winning the north county, with the more conservative candidate (typically Republican) winning in the south.

The likely victor is decided by how many voters in the connecting suburban districts turn their heads toward them.

Sue Gunn flipped this equation by winning both the urban area and the rural south, with the connecting suburbs going to her opponent, Jeff Davis.

Unfortunately, Sue had to retire because of health concerns. She'll likely be replaced by E.J. Zita, an Evergreen State College professor and south county resident. At least on the surface, it seemed likely that Zita might be able to repeat Sue's run.

But, when you look at the map of the (very very close) results, Zita will have won by the more traditional liberal's route in Olympia, through urban Thurston County.

Zita did win a handful of precincts in the south county, and Jerry Farmer (her opponent) seemingly owned the suburban neighborhoods. But, Zita's high margins in Olympia seemingly put her over the top.

It is worth noting that liberals (Democrats) usually win in Thurston County, so it isn't that exciting to note that the liberal won again. The notable thing in 2013 was that Gunn (a former Democratic Progressive Independent candidate for congress) beat a fellow Democrat (Davis) by being more liberal. Or, she was at least more anti-establishment.
Posted by Emmett at 11/10/2015 06:03:00 PM

Thanks for doing this. Really interesting. Oddly enough, it looks like the Evergreen vicinity turned out to be Farmer country.

Do you think you could do a similar map with Proposition 1, the parks measure?

Yeah man, check this out: https://goo.gl/pZS9Sj

Since the vote passed, I concentrated the map on who voted the most *against* the measure. Seems to be a pattern of further you get from the center of town (generally less walkable neighborhoods) the more you hate parks. Or, hate more parks.

Thanks Emmett. I doubt that people hate parks, or even more parks, but some folks were concerned whether the city would be disciplined in how it allocated the money. As well as increases to property taxes. Even so, only six of 60 precincts did not support the measure. A pretty impressive mandate for more parks, and better parks.

Can you do a map of the Bardin-Bateman race?

Looks like the closer you live to a large-scale shopping area, the more you like Bardin. And, in the nearby Eastside.