In 1891 when someone stood up against Thankgiving 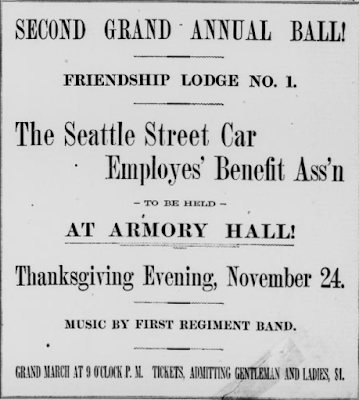 C.B. Reynolds of the Washington Secular Union in 1891:


We no objection to pumpkin pie, but we do protest against its being seasoned with theology.

That is about the best quote ever.

And, the quote really puts a light on how far back our churched vs. unchurched tradition goes back up here. Although I doubt the WSU had a long tradition (hard to find any evidence of them beyond the early 1890s), it was already being pointed out that our region is pretty ungodly 25 years later:


The great problem, to my mind, in the Pacific Northwest is lack of religious life. Many causes contribute to this. The newness of the country, its people coming here from all parts of the world, strangers to each other, without the family and home connections; the population is cosmopolitan, with nearly every nationality represented, with a large proportion of Southern Europeans and Orientals, who have no religious life nor Sunday observance.

It didn't matter in the end what Reynold's and the WSU wanted, Gov. Ferry did his part and issued a proclamation and honored the almighty anyway. I mean, who else are you going to be thanking? 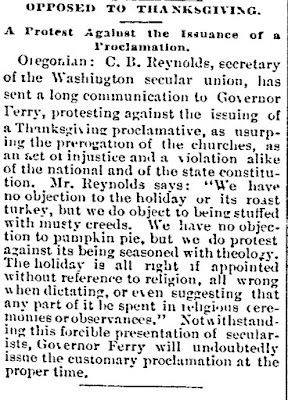