Former Thurston County Sheriff Gary Edwards is running for county commissioner. So, it would make a lot of sense that he's making public safety (more cops on the streets, or deputies on the road) a campaign priority. 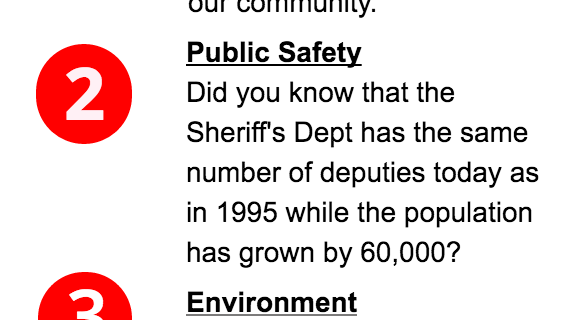 I can't disagree with his statement that the number of deputies hasn't increased in over 20 years, but I thought I'd check his population numbers.

But, either way, he's wrong.


He could use the top number, the total difference between Thurston County in 1995 and right now and be closer to his 60,000 number. But lumping in the populations of cities covered by their own police forces would be misleading.

Or, he could cut his number in half and be more accurate. But, the number would seem less impressive, especially against a six figure total population figure.

What really impacts me is that this table took me all of ten minutes to put together. Getting the accurate number wasn't hard for me, Edwards should have bothered to do the same work. Not doing so make it seem like to me that this is more along the lines of something he heard somewhere and decided to make a campaign platform.

It is also worth noting that a total population is not a very good standard for judging the effectiveness of policing. What would be a better standard would be comparing crime rates in 1995 and 2016, right?
Posted by Emmett at 4/10/2016 07:53:00 AM

Article is also misleading.i am positive those in the city travel and recreate in the county and are the ones prone to needing sheriff assistance

Article is also misleading.i am positive those in the city travel and recreate in the county and are the ones prone to needing sheriff assistance

Here is some more math: https://www.wethegoverned.com/sandra-romero-the-200-million-commissioner/

Here is some math Emmett will appreciate: https://www.wethegoverned.com/thurston-county-invents-42000-gopher-tax-for-new-homeowners/ , and note that this article has been shared on Facebook 6.4K+ times over the last month - more math that can be appreciated.