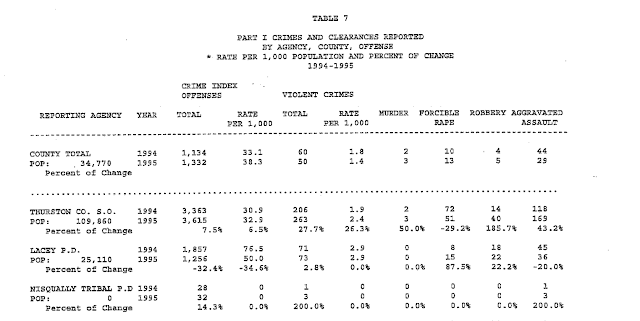 A few weeks ago I took a shot at Gary Edwards' fuzzy math on population change in Thurston County. In this post I wanted to take a closer look at the deeper assumptions in what he's trying to get at.

But, that statement seems to assume a result, such as an increase in crime. So, let's take a look.

So, what it looks like here is that the crime rate did go up in Thurston County, but not nearly the rate that it increased in Lacey and Olympia. If we have a problem with an increase in crime, its in the urban areas, not in rural Thurston County with its stable level of policing.

Also, let's take a look at another metric, the total number of police in each Thurston County city and the ratio of police to population:

Every police department has seen a decrease in the number of police on patrol compared to the population. By this metric, the ratio of police per person has dropped the least in the Thurston County sheriff's office than anywhere else locally.

So, while Edwards is still right that population went up and the level of policing stayed stable, he's implying a connection that really isn't there. The Thurston County sheriff's department saw a stable cop to resident ratio (compared to other local law enforcement departments) and this did not result in an increase in crime.

This is terrific enterprise reporting. It deserves wide distribution.

First metric: I don't think it can be sold that a 9% increase in crime is not a problem, particularly in what has generally been a safe community. The other cities have their own forces, their own policies, and their own law enforcement issues.

Second metric: I don't think this is a metric showing the ratio of officers to the population, though the spreadsheet you received was marked "total and ratio of commissioned officers." The spreadsheet did contain population numbers, which broke down like this:

Here is some math Emmett will appreciate: https://www.wethegoverned.com/thurston-county-invents-42000-gopher-tax-for-new-homeowners/ , and note that this article has been shared on Facebook 6.4K+ times over the last month - more math that can be appreciated.

@ Justin, the ratios I used, IIRC, were from the WSPC report.