EDIT: Emmett, do more research. Gary Edwards should tell the truth about who is responsible for the Tyson Seafood plant purchase

Well, when I'm wrong, I'm wrong. I was wrong about this one.

My research stopped in 1998 soon after the purchase of the property when Oberquell and O'Sullivan both made steps to move forward and Edwards was largely silent. If I took one more step into 1999, I would have seen organized and vocal opposition by both commissioner O'Sullivan and Sheriff Edwards.
I still think there's a point to Commissioner Oberquell being involved in the original purchase of the old seafood plant. And, I think Edward's implies too heavily that the plant was purchased under the leadership of the current commission. But, that said, I was wrong.

Gary Edwards, now candidate for county commission, gives a long-winded interview to a local conspiracy theorist. It includes this small little gem about a listless county commission, stumbling into a multi-million dollar problem:

Gary, you're so smart. Only if we'd listen to you then. Or your supporters.

But, it turns out that not only was Edward's complicit in the purchase of the Tyson Seafood plant in the late 1990s, but two of his supporters help guide the purchase and early development.

First though, I should back up and say that Edwards glosses over the legal situation the county was in at the time, by simply saying "I was running an overcrowded jail."

Back in the late 90s, the Thurston County jail wasn't just overcrowded. It was beyond that, it was inhumane. To the point that the ACLU was pressuring the county to improve the conditions in the jail. Edwards was running a bad jail.

In a letter from that era from the ACLU:


As long ago as 1996, we reported to you some of the complaints that inmates relayed to us. These included:
Most of these problems were directly attributable to overcrowding. We received complaints from corrections officers as well as inmates, who also expressed their concerns that the dangerously overcrowded situation made their jobs unreasonably dangerous due to the enhanced risk of injury from assault, fire, and communicable disease.

So, as a way to push back against overcrowding, the county commissioners spent $3.8 million to buy an old fish processing plant only a few miles from the current county jail.

So, who was on the county commission then? Diane Oberquell, who is listed as an Edwards supporter, Judy Wilson and Dick Nichols (both Republicans). When Edwards was serving as county sheriff at this point, he was also a Republican.
And, since even satellite jails take time to develop, the Tyson plant (though purchased by this point) was still a topic in 1999. By this time Nichols had retired from the commission and had been replaced by Kevin O'Sullivan. Commissioner O'Sullivan was part of the county commission (along with Wilson and Oberquell) that continued to push for the use of the Tyson plant as a jail. O'Sullivan also currently endorses Edwards.

I can't find anything in the record during those years Edwards speaking up against the Tyson plant purchase. In fact, what I did find was advice by the sheriff's office to move forward despite growing public opposition to the plan.

Here is a portion of county commission minutes that show not only one of Edwards' undersheriffs pushing for the Tyson plant, but also Oberquell. 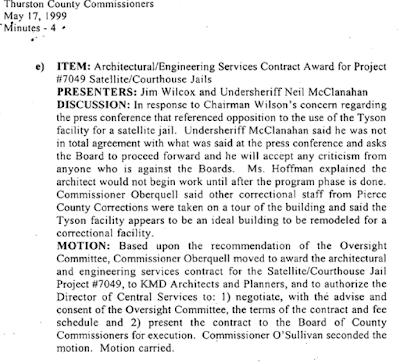 When it came time to decide whether to purchase the seafood plant that Edward's now criticizes, it was his supporters and employees were at the helm. Also, as county sheriff, he was in a choice position to publicly call out what he says now was a horrible waste of money.

By being vague about it now Edwards seems to hint that the current commission (the longest tenure of which didn't begin serving until 2000) is at fault. But, when you scratch the surface just a little bit, the people now surrounding Gary Edwards first dug the Tyson Seafood plant money pit.

This doesn't ring true. How was Sheriff Edwards "involved" except that he had to do what the Commissioners budget for? If memory serves me correctly, Sheriff Edwards was forced to go along with the plan to buy the building.

False information. Someone should do their homework. I worked in the jail during that era and we and Sheriff Edwards didn't want the Tyson building.

Emmett's reporting jives with my recollection. This project was the big wet dream of the law enforcement community at the time. Diane and Kevin were very close allies of Gary; the idea that they'd go rogue on him is absurd.

Yup, nope. I was wrong. See the edits above. At least both O'Sullivan and Edwards both opposed the seafood plant as satellite jail plan as early as 1999.