Lacey is taking a lot of umbridge with the position of some folks in Olympia that Lacey serves very little purpose to possible visitors (Ken Balsley):

The Olympia, Lacey, Tumwater Visitor and Convention Bureau (VCB) is about to embark on a major promotion campaign to promote Thurston County as a destination for visitors and tourists. It’s entitled “Experience Olympia.”

A majority of the Lacey City Council – – as well as myself – – think this is the wrong way to promote the entire region, and that concentrating on “Olympia” demeans and denigrates the other two cities which kick in money for the VCB.

Just a quick note, please read to the bottom. This is not a Lacey sucks post.

Ken later makes a great point about the use of the Regional Athletic Center (funded by most of us, led by Lacey and located outside of Lacey), but I'll take on his position more directly that Lacey is owed any respect as a "place" that people would visit.

For starters, consider this piece in Strong Towns about the irony of taking engagement photos in a suburban development. Which is most of what Lacey is really.

There is a reason no one takes engagement photos in the subdivision; they can be places not worth caring about. We wouldn't have been criticized if it was.

And, just to apply this premise to here, this is a map of geotagged photos with the term "engagement" in our area. 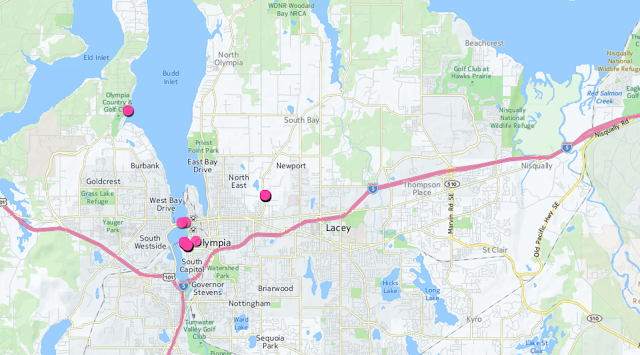 Most of the photos are in the most placey place in all of Thurston County, downtown Olympia, the Capitol campus and Budd Inlet. Lacey does have churches, is has St. Martins and the Worthington Center, so I know people getting married in Lacey. But, when people are looking for a place to take photos in preparation for their wedding, they go to a place.

Similarly, when people travel, they also need a place to be. A series of only drivable neighborhoods connected by parking lots and big box stores similar to either the ones they came from or the ones in Lakewood 20 minute away is not place enough for tourists. The Regional Athletic Center, notwithstanding of course.

But, for Lacey, this isn't some mistake of history. It didn't come upon this state by accident. It has planned not to be a place.

These two maps in particular makes me think of Lacey less of a place and more of a convenient municipal organization.

This is a map of where the people are east of Olympia: 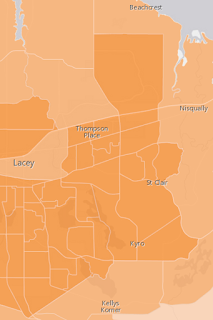 And, this is a map of where Lacey is, almost straining to get out of the way of a lot of the people who live east of Olympia: 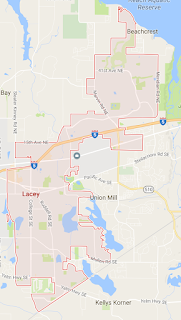 This is not a natural community or a natural border around a place. This is a city that bends itself to become successful, but not serve people.

I remember being in a forum for candidates for county sheriff and asking if it would be easier to be sheriff if Lacey annexed the urban neighborhoods like Tanglewild and the Meadows. I don't remember the candidates taking the question very seriously, but most assumed Lacey would never annex those older, dense almost urban areas.

Here is a short visual history of how Lacey grew north of those neighborhoods since the 1980s. It was more convenient for Lacey to annex places that didn't have people (at the time of annexation) and stretch itself around places where there were people. 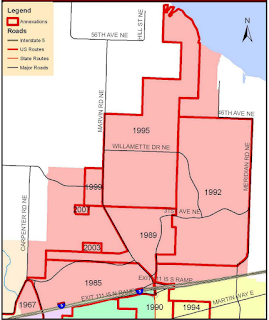 And, I know full well why Lacey hop-skipped over these older, in decline neighborhoods along Martin Way. Back to the engagement photos post:


These places were not cherry-picked. They are everywhere. The drive-in snout house is more common than all the brownstones in America by a factor of 20.

We know the story of these places. We know what is next: decline. And, to use a happy couple as the backdrop probably does feel like a slap in the face. While I never intended to make a moral statement (certainly not about individuals living here), the photos do make a judgement on our culture. We build places that cost us lots of money, don't work very well, and people ignore them when they're looking for nice place to take a photo.

By the 1980s and 90s, the older neighborhoods that didn't become part of Lacey when it first came to being in the late 60s were too far gone, too below standards, too expensive to maintain for Lacey to want to bring them in. In the pessimist's view, they were what the rest of Lacey was possibly going to become.

I'll acknowledge one more point from the pro-Lacey name folks. There are a lot of hotels not in Olympia that carry most of the freight for the visitor and convention bureau that want to go Olympia only. It would make sense to acknowledge their places and their contributions because. at least the hotels outside Olympia use their own cities as label right?

Not really. It's a mixed bag overall, but the Olympia name carries pretty far. In the Hawks Prairie section of Lacey: 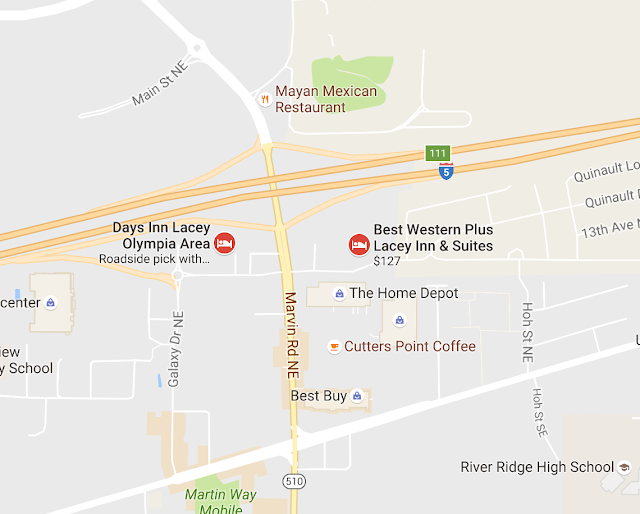 This is a little bit misleading, some of these hotels are actually in Olympia, but the other ones in Lacey still use Olympia: 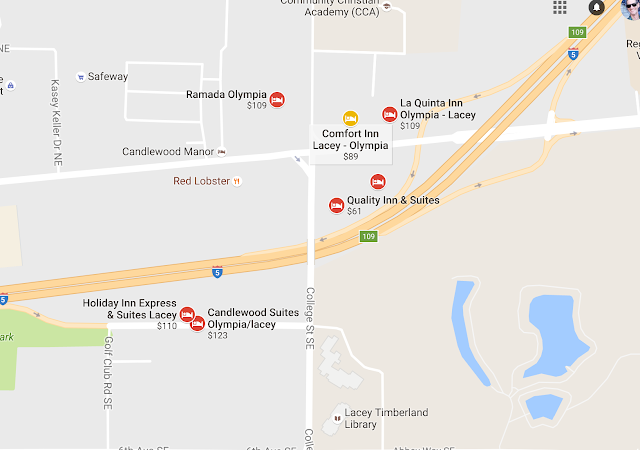 And, also the Tumwater hotels also use the Olympia name: 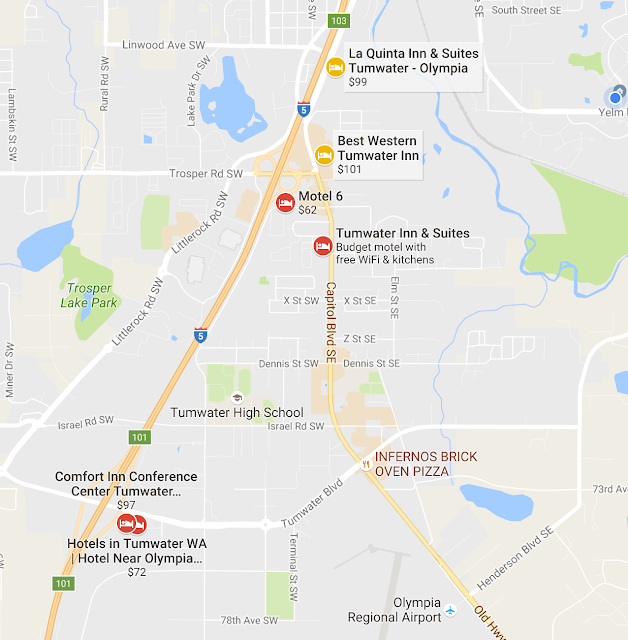 I hope everyone reading this gets down this far, because I'd like to say this as well: this is not a 1997-esque Lacey Sucks sort of post. Because I don't think Lacey sucks. I'm not a huge fan of unwalkable, unbikeable, retail sales tax centered city development. But if I wanted to spill word tilting against that wildmill I'd be pretty unoriginal. To that end, I think Lacey has been doing some good work to correct the sins of the past.

And, since I've lived in the most Lacey-like part of Olympia (SE side) for the past 14 years, it would be supremely ironic for me to take too hard a swipe at Lacey.

So, let me sum up this way. I can see why people live in Lacey. Tens of thousands of people live there. Lovely neighborhoods, convenient to drive to the store. Drive anywhere really. Other than youth sports tournaments, I don't see why anyone would visit there. I wouldn't suggest anyone visit my neighborhood as a tourist either.
Posted by Emmett at 8/23/2016 06:58:00 AM

Email ThisBlogThis!Share to TwitterShare to FacebookShare to Pinterest
Labels: lacey

The Jazz Festival in Lacey draws people from all over the nation and Canada, and a few other countries. It draws at least 12,000 over the June weekend. Lackey is a diverse community, 26% non-white, unlike Olympia (16% non-white) so it does garner visitors that feel more comfortable here than in Olympia: Cops, Cars and Kids get people visiting from throughout Thurston County, as well as from JBLM. But, I agree, Lacey should withdraw its $80,000 from the VCB and let them promote only Olympia with Olympia's own funds. Perhaps, Tumwater, Lacey, and other Thurston County cities can fund their own marketing.

Great post, Emmett, but I'm puzzled by your characterization of The Meadows as an urban neighborhood. It seems the very model of low density cul de sac development.

Also, vis a vis Lacey's refusal to annex Tanglewilde and Thompson place, let me offer a more blunt explanation: it would cause a huge increase in the city's crime rates. I regularly ride the IT route 62 bus to and from work, and hence have ample opportunity to observe the demographic character of the people living in that part of town. A good deal of the rabble who afflict downtown Olympia call Tanglewilde, Thompson Place and the Meadows home.