Not since 2004 when Dino Rossi got within a hair of non-incumbent Christine Gregoire has a Republican gotten close the governor's mansion.

This year Bill Bryant is making his run and he's staking his election on the turnout of 100,000 extra conservatives:


His path to victory, Bryant explained, hinges on turning out some 100,000 Washingtonians — mostly likely-Republicans or conservative-leaning independents — who failed to vote in the 2012 election but probably would have backed Rob McKenna, Washington’s last GOP candidate for governor.

This 100,000 is pretty core I suppose to Bryant's math, because seems to talk about them a lot.

There were more than 100,000 voters in the 2012 election who would have picked Inslee’s Republican opponent Rob McKenna but who didn’t vote, Bryant said. McKenna lost to Inslee, a Democrat, by about 94,000 votes.

So, as I understand his argument, his goal is the turn up turnout among conservatives (who identify as Republicans or not) while hoping Democratic turnout stays flat.

I tried to simulate a couple of ways he could do that. Here is my math. Feel free to check my work, I've been wrong before.

First, among the counties that fell below the average turnout in the gubernatorial election in 2012, I turned the turnout among Republican voters up to the average of all the counties. The above average counties I let stay the same.

Second, I took Republican turnout and pumped it up to the highest turnout of 87 percent in the gubernatorial election. This is incredibly pie in the sky since a lot of counties have turnout much lower than that. But, in this case, the Republican wins with 1,652,166 votes. Way more than enough.

The third one was trying to find the Goldylocks solution, how far you'd need to pump average voter turnout to just the right level to get Bryant over the finish line. This turns out to be 84 percent across the board, assuming Democratic turnout stays the same. This still sounds like a lot of turnout.

The chart below illustrates the second option, 87 percent turnout across the board. It shows you the actual votes (in blue) and the new votes (red). 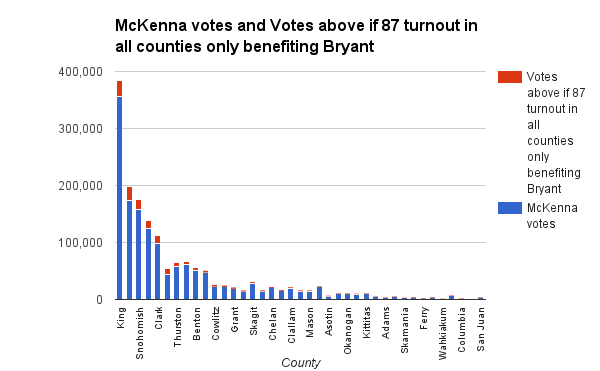 There are more new votes (via math) to be had in King County then there are in the most Republican of Republican counties. But, I don't think these votes actually exist. Churning up new voters in King County (and other large Puget Sound counties) would only churn up new Democratic voters.

So, I'm not sure I think the 100,000 voters Bryant and the Republicans are looking for exist.

Lastly, I hope everyone appreciates the irony of Republicans talking about the benefits of higher voter turnout.
Posted by Emmett at 8/24/2016 05:04:00 PM