It matters that Gary Edwards cost Thurston County $500,000 in lawsuits 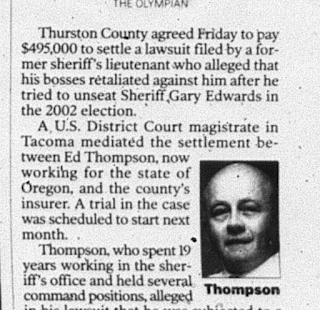 After his last run for sheriff 14 years ago, Gary Edwards faced a couple of lawsuits from his former opponents. Both now former sheriff deputies, they claimed that Edwards used the power of his office to discredit them during the campaign.

Edwards ended up beating both of them, in the primary and then eventually in the general election. But one of those lawsuits was settled for half a million dollars, and in the other, a jury sided against Edwards.

The lawsuits include an assortment of allegations, including harassment and retaliation against Ed Thompson and Glen Quantz. In the case filed by Quantz (in which the jury decided against Edwards), the former deputy claimed that Edwards delayed an internal investigation to make sure it was still open until after the election. The internal investigation ended up clearing Quantz.

I pulled together most of the news coverage of Edwards' time as sheriff in this file.

A judge eventually threw out the jury decision against Edwards in the Quantz case. He didn't decide the allegations weren't true, he only said that as a sheriff, Edwards had the "qualified immunity" to do as he wished.

These incidents and costly lawsuits are only the most interesting aspects of Edwards' service as sheriff. Another is a episode where he joined a fast speed pursuit into Pierce County on Interstate 5. Without telling anyone else involved in the pursuit, Edwards performed a "rolling slow down" during which the suspect (who escaped) his his unmarked car.

What gives me the creeps is that the lawsuits, the questionable tactics, all happened relatively recently. Up until now, I don't think anyone has brought up these issues.  Edwards has brought up issues of county commission actions that predate the current commission and obviously don't involve his opponent or anyone else running for county commission. But, his time as sheriff shows at the very least a management style and decision making that everyone should be able to question.
Posted by Emmett at 9/18/2016 09:36:00 AM

Another important story. Thank you.

Years later, now he sits on one of the most lucrative positions in the County, the County Commission Was trying to remember the time that Edwards did a high speed chase into Lewis County (illegal) with a female commissioner who had a concealed carry firearm on her at all times. I forget her name, but it may have been Diane Oberquell. When Edwards was the Sheriff, he ran the place like the Wild West. What he did to Glenn Quantz was thoroughly disgusting. To have a judge give the wink and a nod to Gary is the epitomy of The Swamp.