Opportunity for Olympia for All 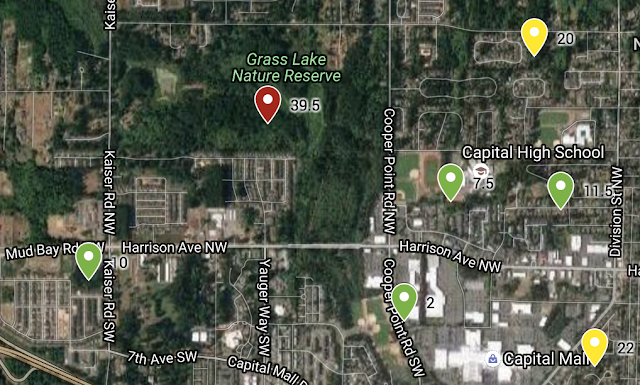 A week or so ago I took a look at the geography of the failed income tax in Olympia.

And a while back I looked at the geography of voter drop-off in citywide elections.

Now this week, I put them together!

The exercise I did on drop off was to figure out if there were neighborhoods that were more robust in their support of the original statewide income tax and the local version. Where did the vote for the first tax (which passed in Olympia) drop the least when it came to the second vote (which failed in Olympia)?

The purpose is to find out if there is a correlation between a neighborhood a robust supporter of an income tax and a neighborhood where fewer people would vote in a city council election.

It looks like there is a "slight" correlation (in the words of a smarter person that I asked to take a look at the numbers for me):

This chart is not mine (that smarter person did it), but I did collect the data: 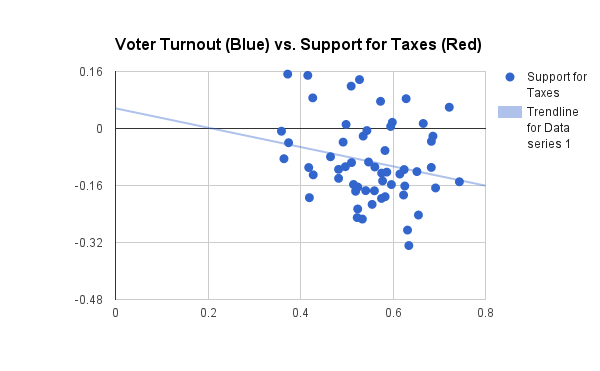 So, if you're a local political group that is interested in progressive politics, changing city hall and increasing participation in local elections (like Olympia for All, amiright?) these precincts that ranked both high in tax support and low in local voter turnout would be your main targets, right?

In the map below, I categorized the neighborhoods, combining their rank in voter turnout with tax support, and came up with four categories. Green is the best, then yellow, orange and red.

Except for downtown, this is a very interesting map to me. Southeast Olympia as a broad swath of orange, that's not surprising at all. That's where you'd expect higher turnout and a lot of side-eying of progressive ideas.

But, the green neighborhoods are fascinating. They're mostly newer, non-walkable and high density neighborhoods on the edge of Olympia.  There is a large collection of them along Harrison Avenue west of division and the most of the ones on the east side are east of South Bay Road.

And, a lot of the typical close-in, very walkable neighborhoods rank very poorly. And, this isn't just because they retain participation in local elections. If you go back to the Opportunity for Olympia map, you see less support for the local property tax.

There is opportunity out there, but it's among the newer apartment buildings and neighborhoods on the edges of town.
Posted by Emmett at 11/23/2016 08:05:00 AM