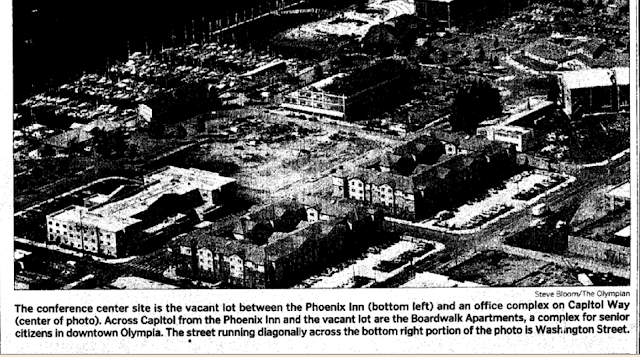 Thanks for this very informative article. I'm against a new convention center in Olympia, or anywhere in the South Sound, as I'm told they generally lose money and there are better uses for our limited downtown space. Another public enterprise that allegedly loses money is the Port of Olympia's Industrial Marine District. I would very much like to see the Port convert this district to "pleasure boating;" i.e., end the commercial cargo business and move the Olympia Yacht Club to the space vacated by commercial Port activities, while the responsible parties remove the Capitol Lake dam and restore the estuary. The entire Port Peninsula waterfront could then be dedicated to boating, boatworks, small waterfront-related businesses, and completion of the "Big W" trail, which would generate far more, albeit indirect, economic activity by making downtown an even more attractive destination. We are the state Capitol, after all, and I see part of our identity as a city as reflecting the best attributes of the area for the enjoyment and edification of visitors and residents alike. The Port has done an excellent job with development of the Swantown Marina, and the rest of the waterfront could have the same "look and feel."

The ONLY way a "convention center" would be acceptable to me is if it replaced the marine district. A waterfront hotel with meeting rooms might lose the same amount of money, but would at least serve a useful purpose some of the time. The views would be superlative. I'd stay away from the name "convention center," and scale it to smaller conferences and meetings, weddings and family reunions – more of a small tasteful resort, in fact, than a convention center. Visiting boaters have also expressed to me their desire for more things to do downtown. This would bring people and activity to the Peninsula without the downside. Thoughts?