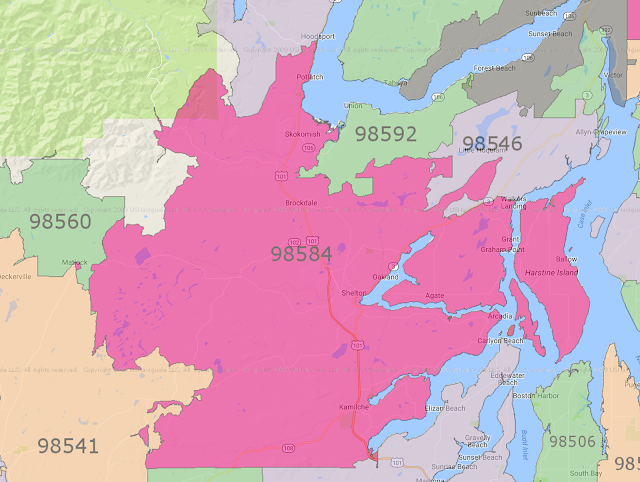 I also noticed a pattern in the Puget Sound zipcodes that recorded a Sanders/Trump voter. Only two of them were urban zip codes, despite having most of the population. The majority of them were in rural areas near the urban core. I wonder if there's something to read into that.
Posted by Emmett at 8/25/2017 12:47:00 PM No comments:

Steve Salmi has a great rundown of yesterday's results in local elections over at Green Pages. But I think that his "rather groggy" assessment of how well progressives did in Olympia might be overblown.

In fact, what Salmi describes as Olympia's "power elite" are probably boxed in.

Take Position 5 as an example, where you see the power elite Allen Miller facing more usual pair of progressives, Deborah Lee and Lisa Parshley. Miller and Parshley will face off in the general in November, but together Parshley and Lee took 55 percent of the total citywide.

November will be a much different election than August. Voter turnout will be up throughout the city in the fall, but not in a uniform manner. Each precinct behaves different and if you look at where Miller did well, the future doesn't bode well.

In the sixteen precincts that Miller won, taking into consideration voter turnout in 2013 and 2015, he can expect a 64 percent increase in turnout. But in the precincts he lost, the turnout would go up 71 percent. If you just narrow that down to his 16 bottom precincts, where he'd do the worst, turnout goes up 79 percent in November. The further Miller goes from his base of support, the more turnout will go up in November. This isn't good news for a candidate who didn't break 50 percent in the primary.

Despite besting his opponents, Miller also seems boxed in geographically: 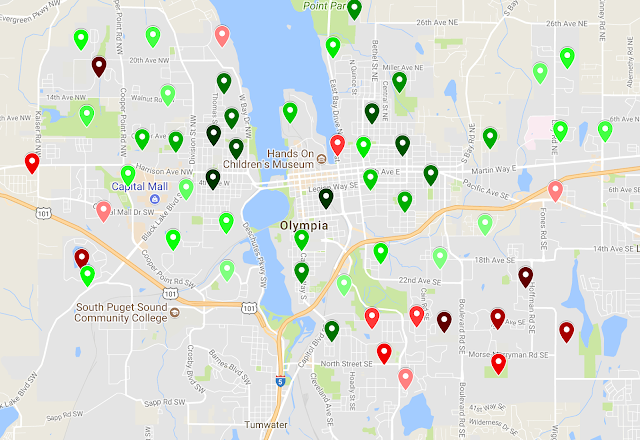 Here is the clickable map:

Basically, Miller's base of support is on the far edges of the Westside or in the traditionally conservative (for Olympia) unwalkable neighborhoods in the Southeast. He did take a couple of neighborhoods near Budd Inlet, but these were two of his worst performing precincts. Lee and Parshley not only did better citywide, but their geographic spread goes much further, covering practically the entire city, short of the Southeast.

If you take a quick look at Position 6 race where power elite Jeanine Roe and progressive Renata Rollins are both advancing, you see Roe in nearly the same position as Miller. She won the primary, but without cracking 50 percent. Again, the precincts that she won will see a smaller increase in November (62 percent) vs. the ones she lost (73 percent). Also, the geography of her win is isolated to nearly the same precincts won by Miller (plus South Capitol vs. minus a couple of Budd Inlet precincts).
Posted by Emmett at 8/03/2017 05:34:00 AM 3 comments: