If you work outside Thurston County, you're more likely to not like downtown Olympia

The city of Olympia commissioned a public opinion poll in December. The poll mostly covered concrete things like how important various city services are and how well they're being delivered.

But the survey also got into an interesting line of questioning about how residents perceive safety in Olympia. The pollsters asked whether we feel safe in our neighborhoods during the day and night, and more important, how we feel downtown during the day and at night.

Here are the totally unsurprising results: 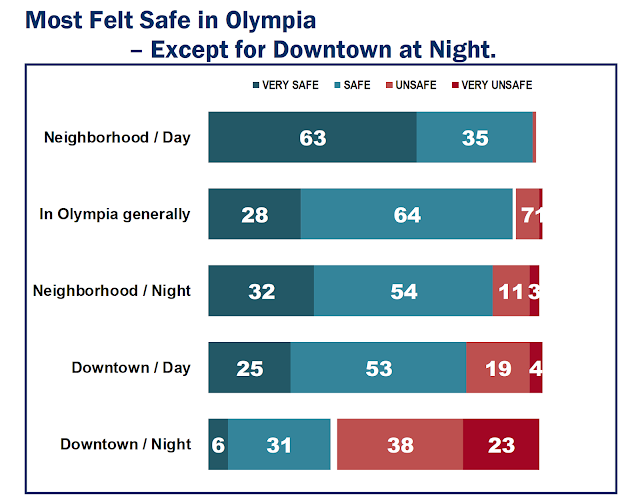 Most people felt most safe in their own neighborhoods, and then less safe in Olympia in general and then even less safe downtown and especially at night. There were several groups that drove down the results for downtown. If you were from the Northwest neighborhood, if you thought the quality of life in Olympia was low, if you only had a high school education or if you worked outside of Thurston County, you feared downtown more.

The last one is the one that I'm most interested in exploring. If you commute outside of Olympia on a daily basis, I'm going to assume other things about you. You probably also shop in between home and work. Which likely means that at best you do most of your shopping on the Westside, but more than likely you shop in Lacey or in Tumwater. Your daily habits are tied to the freeways your commute doesn't take you downtown.

Here's an interesting tidbit, 17.2 percent of Olympians commute outside of the county for work, according to the American Community Survey. This is up from 16.9 percent in 2015, but the census bureau has only asked this question in the last two years. If you take commute times though, 22.8 percent of Olympians have a commute over 30 minutes. For most people, I'd assume this takes them out of the county, but at least well outside of Olympia so it might as well be out of the county. And, this number took a significant jump between 2011 and 2013 when it went from 18.8 percent to 22.8 percent (it's remained steady since then).

This wrinkle with long-distance commuting and downtown combined with another result of the city survey makes me think that familiarity of Olympia is a leading indicator of how people perceive their own safety. Literally not one of the survey respondents said they feel very unsafe in their own neighborhoods during the day.

So, what does this mean for governing Olympia? A good majority of the complaints about downtown come from people who are obviously not familiar with downtown. They are fearful about downtown, but I doubt very much that they're even downtown at night. Is it the responsibility of the city to govern in the direction of unfamiliarity with reality?
Posted by Emmett at 1/23/2018 06:00:00 AM