At one time in Olympia, and most other cities, neighborhoods grew one house at a time and they grew with different needs in mind. Mixed-density housing was prevalent prior to World War II and was exactly the kind of development that originally encouraged walkable neighborhoods.

The Carylon neighborhood is a great example of this. A month ago I took a look at a duplex in Carlyon that I was interested in renting. It was a bit outside my price range at the time, and to be honest, I was surprised it was even available in that neighborhood.

Because it shouldn't have been allowed (yellow means no duplexes under current zoning): 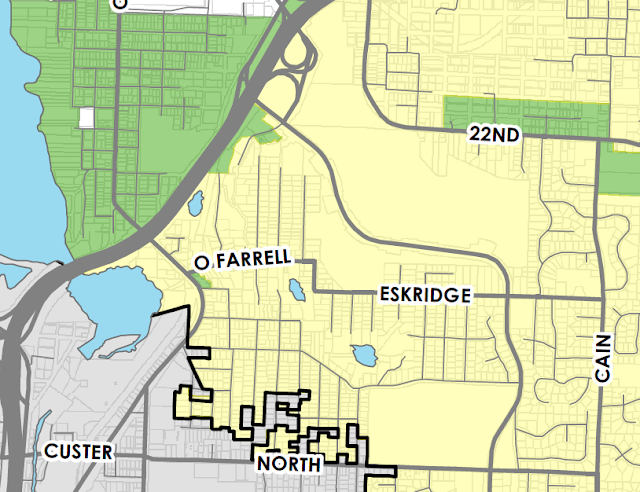 Also interestingly, I thought that it was a single family house that had been split into a duplex, but I researched the history of the structure, and it had always been a duplex.

And, it turns out, that one duplex was not as rare as I thought in Carlyon. The map below shows the different use codes for the buildings in the neighborhood. Red is single family homes, purple are duplexes and blue are apartments: 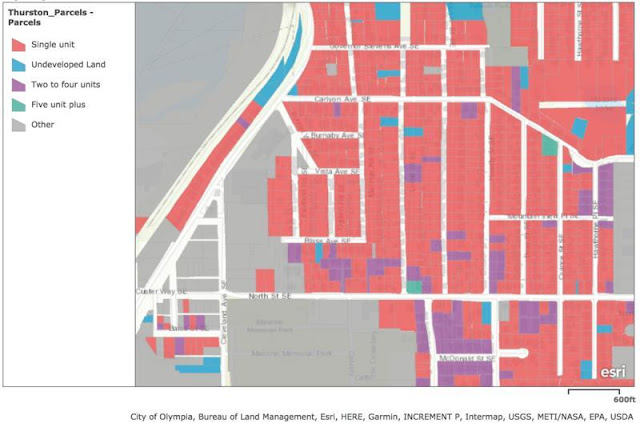 There are not only duplexes spread throughout the neighborhood, there are even a couple of small apartment buildings. This shows how Carlyon, before zoning in our neighborhoods became more restrictive, was able to provide housing for residents across the economic spectrum.

There is a section of the Bigelow Neighborhood that is also a good example of this: 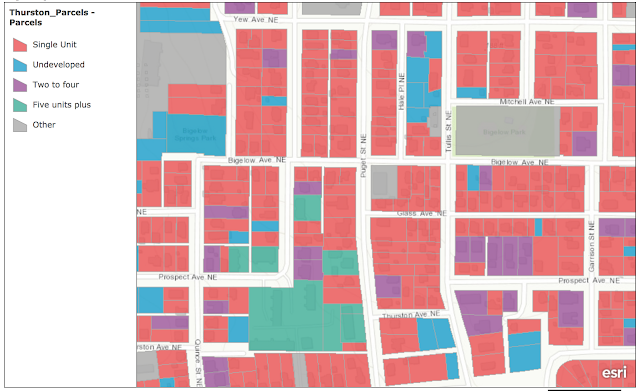 While still mostly single family homes, these neighborhoods have a decent mix of middle-density housing options. And, a lot of it is illegal under current zoning. That if we tried to build a lot of the housing now available in these neighborhoods, it wouldn't be allowed.

And, I don't think anyone can say that these sections of Olympia are unlivable. All in all, they probably represent some of the most economically accessible, livable and walkable neighborhoods we have. And, this is no small part because of the diversity in housing options they offer.

And, they also represent a way of building homes in this city that we don't have anymore because of the restrictive way our zoning works. The traditional manner of regulating neighborhoods was to allow for a diversity of housing types on a block. The way we do things now, with restrictive zones that allow for very few housing types in neighborhoods, is relatively new and experimental. It is also, in my opinion, largely unsuccessful. It has created neighborhoods that are economically stratified and car-dependent.

It wasn't until after World War II that a single developer would take on building all the homes in a neighborhood, which cut down on the diversity of home types.

In this next map, you can really see how the houses were built in the Carlyon neighborhood over a long period of time. It took several decades for this neighborhood to transition from a former cattle ranch into a residential neighborhood. When it was making that transition, it was part of neither the city of Olympia or Tumwater. In fact, it was the uneven development of the neighborhood that gives it it's most unique characteristic, the jumpy city border between Olympia and Tumwater. But that is more trivia than something underlying my bigger point. 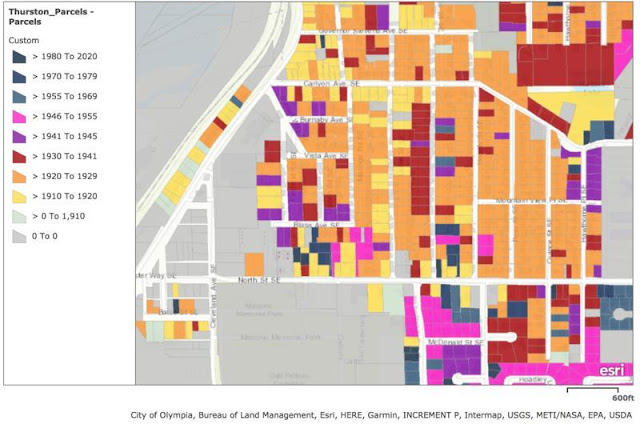 While diversity is present in the neighborhood I live in, Briggs Village in Southeast Olympia, my neighborhood is the exception that proves the rule. Diversity isn't usually a mark of planned development. The helter-skelter of the market historically has allowed builders to offer what was needed on a neighborhood scale when they were able to sell it.

This incredible story at Sightline shows how single-family zoning became more prevalent over time in Seattle, that neighborhoods at one point had been able to be fitted with more than one sort of housing option. While the Missing Middle recommendations we're considering in Olympia now are not an up-zone, the city of Seattle conciously downzoned most of the city in the 20th century, outlawing options like townhomes and neighborhood scale apartment buildings.

Half of the housing options included in the "Missing Middle" exercise are already allowed to be constructed in our single-family neighborhoods. These are Accessory Dwelling Units (ADUs), Tiny Houses, Cottage Housing, manufactured Houses, and Townhouses. These are have relatively low impact.

I live next to an ADU and would guess many single family home owners would not oppose such a unit next to them. Fourplexes or Courtyard Aparements, not so much.

This is not an all-or-none exercise. We need to look at each housing type and decide how we feel about it.

We also need to scrutinize the proposed off-street parking changes, which would place more parking on our neighborhood streets.

And other provisions. There are 43 separate staff recommendations in all.

Bob, how are townhomes less impactful than duplexes?

If you took the two duplexes you own in SE Olympia and turned them into townhomes, would that be less impactful than duplexes?

The only difference I can see is that duplexes are more likely to be rentals.

Thanks Emmett - these are interesting maps and comments. I have a different interpretation.
If I understand the timeline that portrays the development of the Carlyon neighborhood correctly, it was developed in pretty much the same way as modern developments are formed - chunks of land were purchased, subdivided and developed with similar style houses, slowly encroaching like a wave on the farmland until it was gone.
Without zoning anything could have been developed but what was developed was SF homes. There was opportunity to create anything desired - office spaces, stores, groceries, restaurants, urban centers, museums, etc but none of that happened. The market did and will continue to drive what is built and how much it costs.

Many of the housing types in the MM can be built today under the current zoning yet they are not. It is not the zoning but the need for return on investment that prevents most denser housing types. Developers must squeeze out every dollar by filling every square inch with the cheapest materials and most functional and easiest to construct form (a box). Sacrifice aesthetics and innovative architecture in order to achieve the goal of reduced construction costs and best return on investment with least output.
The city could do more planning around urban villages, live/work communities, to reduce reliance on cars and promote amenities that ensure walk-able and vibrant neighborhood with amenities like parks but they instead recommend that we infill with 6 dwelling units (3 SFH with an ADU each) on what is now a single family home lot (10K sq. ft.). I can't even imagine how that can work from a space perspective and still accommodate one car each, the surface water management, access, etc and still be "livable". Oh wait - it can't, that is why they are proposing that we remove the requirement for a parking spot, allowing the height to increase and reducing the set-backs.
Every plot of land will eventually turn over and when that transformation is completed, I foresee a totally different neighborhood than the one that exists now and it will not be as charming nor livable as it was. Gone are the relaxing backyard retreats that make that area livable. In their place will be towering edifices that loom over their neighbor with reduced set-backs that obscure the sky and put the balconies or windows right in the face of their neighbor. Gone are the on-site parking spots and garages so the street is jammed with extra cars. And guess what - the planners do not want to count these ADU's, townhouses and duplexes in the density calculations.
There is a reason that people moved out of the row-houses in cities to the suburbs. We choose SF homes because they provide the widest range of amenities for our family – play area, garden, swing set, pool, privacy, pets, etc that a shoehorned triplex just cannot match. Without the offsetting amenities that are envisioned in a true Missing Middle concept, there is no reason to build anything other than a SF home. The SFH buyer will pay for those amenities that a renter will not and that is the profit for the developer.