When middle went missing in Olympia

In older neighborhoods, you can find duplexes courtyard and mansion apartments dotted along blocks. Even in blocks built in the 1960s and 1970s,
you can see duplexes interspersed between single-family homes.

But as you get into newer neighborhoods, it is harder and harder to find examples of affordable, low-density multi-family housing. I can show you when this happened, but I can't show you why.

EDIT 10:18 a.m.: Ignore that chart down below. It isn't detailed enough. This chart really shows a population spike in Thurston County in the mid-70s and how low-density multi-family housing tracked with migration until the 1980s. Then they became untethered. 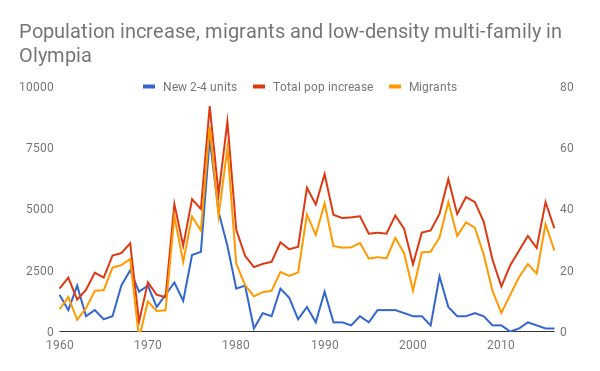 What this chart shows you is the population of Olympia by decade plotted against the construction decade of structures with two to four housing units (Use Code 12). This would cover anything from a duplex to a fourplex and some kinds of smaller apartment buildings. I think this use code is a good stand-in for what we now call the Missing Middle in Olympia. 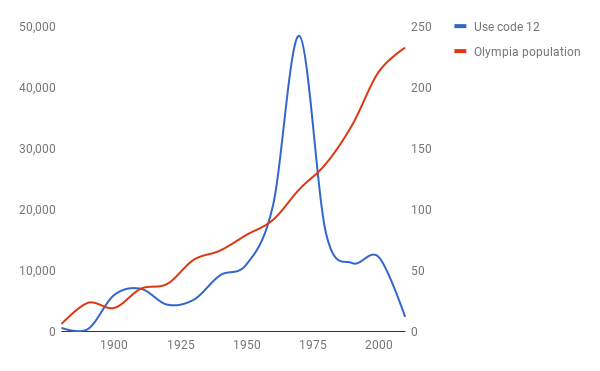 Because the above data is aggregated by decade, it looks like most of the growth is happening in the 1970s. But if you look at it in more detail, you see something else happening. 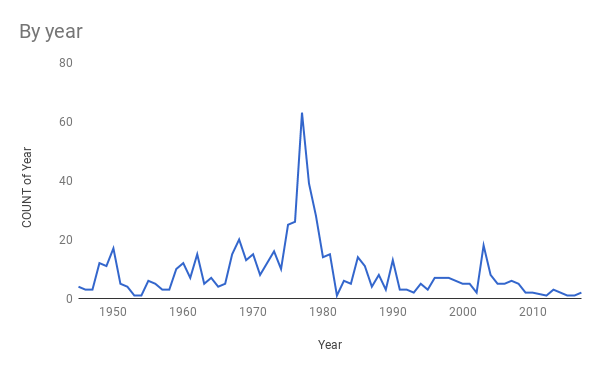 Multiplex housing spiked in the mid to late 1970s and then crashed in the early 1980s. While there have been spikes in construction since then, it never really recovered to even the levels that we saw after World War II. The boom in the late 1970s and crash in 1980 coincides with the boom in migration into Olympia and the early 1980s recession that stopped it. The late 1970s still stands as the largest ever influx ever of new residents into Thurston County. 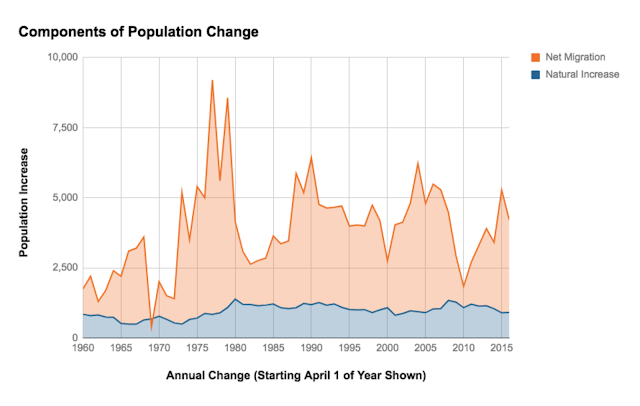 I'd like to chase down exactly what happened to low-density multi-family housing after the 1970s. Based on my post last week and the numbers I'm seeing here, it seems like that at some point after the early 1980s recession that slowed migration Olympia, we changed our zoning laws to clamp down on duplexes. Then we likely experienced a few decades of slower growth where we exacerbated the ends of our housing options (single family homes and multilevel apartments).
Posted by Emmett at 2/27/2018 06:30:00 AM

It would be interesting to compare those charts with equivalent numbers in the county outside of Olympia. I suspect we'd see Olympia's restrictions of duplexes driving an increase in their construction elsewhere, encouraging sprawl.