Is the Independent era in Thurston County (and Washington) over?

Buried deep inside the results of the recent Crosscut/Elway poll was a surprising result, something that hasn't happened in over four years, and not with any consistency since the Bush administration.

For the first time since January 2014, more respondents in a state wide poll said that they were Democrats and not Independents. In the last 12 of 15 polls taken since the beginning of 2008 that I've been able to track down, self identified Independents have been the plurality in Washington State.

Here is the data I'm working with.

The results in the Crosscut/Elway poll are not unexpected. Since 2015, the strength of Independent identification has been slackening. This narrow plurality of Democrats (37 percent to 35 percent Independents) falls into an ongoing trend. 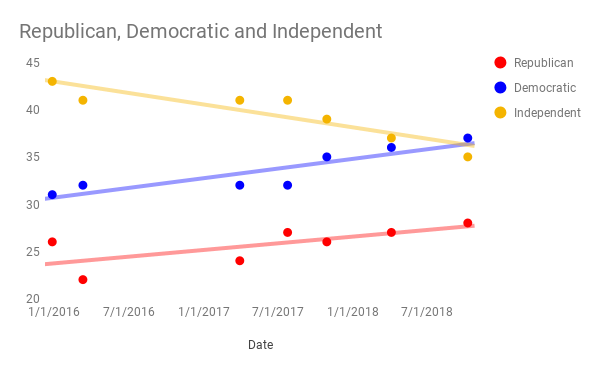 On the surface, it seems like the strong hand of national politics is having a lot of influence in Washington State. While we saw a "normal" order of political identification in Washington during the Bush years, Independents started cropping up after President Obama was elected. And then, given the choice of another unpopular Republican president, Washington voters have begun to flock back to the Democratic label. It seems like the Democratic label in Washington is strongest when in resistance against an unpopular Republican administration. But, that support relaxes when a Democrat is in office.

I was able to track down some partisan identification data from the late 1990s, and it seems like you can see this trend is now repeating itself between the Clinton and Bush years. In 1996, 35 percent said they were Independents in Washington, but after Bush was elected Democrats were the plurality consistently through 2008.

So, bringing it home to Thurston County, what does this mean for our all Independent county commission? At the very least, not anything good. We've already seen that in the primary election, Independent Bud Blake has a much harder task to gather votes this time around. It seems clear to me that in our local elections, using the Independent label has allowed candidates like Blake (and Gary Edwards and John Hutchings two years ago) to obscure where they sit on the ideological spectrum.

How else can you explain Edwards, who literally does not believe in land use regulation, winning alongside Hillary Franz, a Democratic candidate for lands commissioner. There is literally no policy overlap between the two candidates, yet enough people made a contradictory choice of both Franz and Edwards to push him over the top.