What does a medical exemption from vaccination mean in the Olympia School District?


Medical exemptions for vaccinations in the Olympia School District and Washington State might not be what they appear to be.

On their face, these exemptions allow children who cannot be vaccinated (because of weakened immune systems, for example) to waive vaccination requirements and attend school. But, from what I've been able to gather from a public document request from the Olympia School District, the differences between personal-belief and medical exemptions is murky.

So murky that (please read to the bottom), I wonder if doctors or any medical professionals are necessary for the medical exemption process.

Let's work backward first to see how I got here:

About a month ago, while the measles outbreak in Clark County was still new news, I updated what the vaccination rate for schools in Olympia was like. This was similar to other times I'd done this update, there are some scary high exemption rates in Olympia schools. But this time I noticed a new wrinkle: the top schools for personal-belief vaccine exemptions were also the top schools for medical exemptions.

Top Medical (bold if on both):

Top Personal (bold if on both):

To me, this made little sense. If you were a parent of a child who had a medical reason to avoid immunizations, then I think you'd want to then use the herd immunity at your child's school to help prevent infections. What I could see was that there was a correlation between parents who would seek a personal exemption from vaccines, ones that would seek a medical one, and the school they chose.

That made me assume that parents who are seeking medical exemptions are also not necessarily afraid to send their children into environments where a scarily low percentage of the children are vaccinated. This got me curious about the nature of medical exemptions in the Olympia School district overall.

So, I made a public records request for all medical exemption forms that represent active students in the Olympia School District. These are the documents I received and this is the spreadsheet I put together summarizing what I found (folder with both files here). The district blacked out student names and addresses before they gave me the documents, but they didn't black out the names of doctors that signed medical exemptions.

Here is what I sussed out:

1. Naturopaths are slightly more likely to sign medical exemptions. While 25 percent of the medical exemptions I received from the school district, naturopaths only make up 20 percent of the provider types (family, pediatric and naturopath) that I assume would likely be presented with the form. Some forms were also signed by physician assistants and nurse practitioners.

2. Some doctors sign more than others. Like schools that seem to collect medical exemptions, some doctors seem to sign more than their share. This may be a consequence of who they see (people that are more willing to ask for a medical exemption), but I will probably never find that out. While a vast majority of the doctors who signed the forms only signed one, there were a few that signed several:

3. What does a medical exemption even mean? Over 75 percent of the forms had both the "medical" box and "personal" exemption marked on the form. This seems to undercut the meaning of the medical exemption form altogether. What may seem like an inexplicable bunching of both medical and personal belief exemptions (why would an immune deficient child attend a school full of unnecessarily unvaccinated children?) isn't. What it really could be is just a larger group of children whose parents declined vaccination for personal beliefs but got their doctor to sign a medical waiver.

Then there was this: 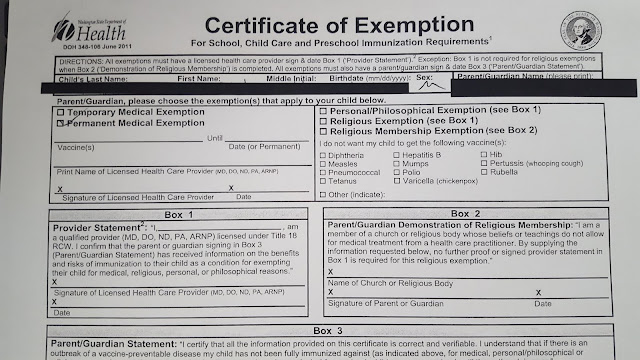 If a parent can sign a medical exemption form and it be accepted by the school district, what is the point of even requiring them at all?
Posted by Emmett at 3/10/2019 03:45:00 PM