How much did cutting the middle out of our housing stock cost Olympia in the last forty years?

I've pointed to this chart oftentimes as an illustration of how we changed directions back in the 1980s. 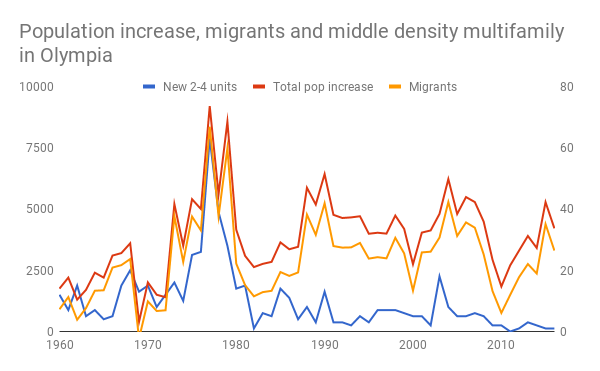 I've recently been rethinking this graph, mostly due to new perspectives on a fairly old policy tool to encourage apartment construction in downtown Olympia. Dan Leahy has been writing in Works in Progress about the multi-family tax exemption and how the rest of us are subsidizing new construction downtown.

While the discussion around the multi-family exemption does not reveal anything new (someone pays taxes if someone else is exempt), it does give a new ax to grind to people who would rather stay the course with how Olympia has been developing in the last forty years. Car-dominated suburban developments get a pass, while any sort of development downtown that is not a parking lot is given a side-eye or actually challenged legally.

But, the discussion did open an opportunity to examine how exactly our spreading suburban development pattern has cost the city's bottom line.

As a background, I used the Thurston County Assessor's parcel data provided by Geodata. This dataset gave me locations and construction dates (important for that chart), but also lot sizes and total values.

Also, I wanted to point out that only in the broadest sense am I talking about "denser" housing. Leahy is mostly discussing downtown Olympia apartment buildings, while I'm discussing anything from a duplex to a quadplex. While we oftentimes conflate these when we discuss housing and zoning, I want to make sure we know I'm talking about different types of housing.

Now, let's get to the data!

At some point in the early 1980s, the construction of duplex to quadplex sized homes became disconnected from population. I chose 1981 as my splitting point because it seemed to make sense to me.

Between 1960 and 1981 Olympia averaged 6.2 two to four-unit buildings per thousand of population increase.

After 1981, that rate fell to 1.23 units per thousand new residents. Building non-apartment/non-single family home dwellings went through the floor after the early 80s.

What happened in the early 1980s? Go back and see the policy changes we made to favor single-family homes and the hateful political ecosystem that created it.

And because we know how many people have either been born or moved here, we can calculate how many du/tri/quadplexes we lost because we changed the rules. If we built at the same rate we did before 1981, we would have built 723 more du/tri/quadplexes. We currently have 786.

That on its own is shocking. That means we outlawed between 1,500 and 3,000 living spaces since the early 80s. If we continued building duplexes, triplexes, and quadplexes in Olympia, we would have nearly doubled the number of these more affordable units.

But, let us not stop there, this is about the public subsidy, not affordable homes removed from the market by bad laws. Because we know how much single-family home properties are worth and how much du/tri/quadplexes are also worth, we can calculate roughly how much each type pays per acre.

It should surprise no one, but the more dense housing types subsidize single-family homes.

This is not taking into consideration the added value du/tri/quadplexes would have brought to single-family homes.

So, when you lay out what we lost (at least 1,446 affordable units) against their higher value, you can get an idea of what our historic single-family home favoring policies has cost our city.

Doing a back of the napkin calculation based on last year's levy rate, the lost taxes (not just to the city, but to everyone who collects property tax in the city) was $3 million per year.

To put this into perspective, in his post that I linked to above, Dan Leahy points out that across of all the multi-family exemption projects, the loss in total government revenue is $3.4 million over eight years.

What we lose per year because we made a decision forty years ago to favor single-family homes is the same amount we lose over eight years for encouraging more dense development. This calculus also ignores the higher tax receipts that an apartment building will produce as opposed to a parking lot once the exemption is over. And, also (obviously) that the tax exemption is temporary, while single-family zoning is a bit harder to budge.
Posted by Emmett at 9/03/2019 06:50:00 PM

Emmett, thank you for taking the time to produce some really interesting research.

If Olympia’s policy shifted in the early-80s, I wonder whether the city’s form of government might have had an influence. The city didn’t switch to a council-manager system until 1982. Between 1978 and 1981 the three-person city commission was run by Lyle Watson, William Jacobs and Ron Rants. The website for the Rants Group says it was formed by Ron in 1973. That raises a variety of questions, such as whether the land-use policies approved during his time on the commission were closely aligned with the goals of the development industry.

Your point is well taken that those of us who live in single-family homes arguably enjoy a tax subsidy. That said, Dan Leahy was right to “follow the money” regarding tax breaks for developers – including Ron Rants. Olympia would do well to display greater transparency in its decision making if it wishes to build the credibility of Missing Middle initiatives.

For the sake of historical honesty, it would also be helpful to know if Ron Rants is now being subsidized to undo the very problems he helped to create – both as an elected official and a development industry leader.

The premise stated here is false in Washington State. Why? Property value only determines additional revenue for new construction. Otherwise, revenue from property tax is limited to growing no more than 1% per year.