How did our housing practices shape Olympia's racial makeup?

Amanda Smith, the former mayor of Olympia, sat in a suddenly silent city council meeting in the spring of 1968. She had been mayor in the 1950s and had come back to city hall to speak out in favor of an ordinance to prevent housing discrimination.

Duke Stockton had just stopped speaking against the ordinance and had pieced together a speech that shocked the crowd to silence.

"A man should have the right to do what he wants with his own property."

"We don't want them living in Olympia, but if they do live here, let them stay in their own communities and leave us alone."

"It leads to intermarriage..."

Mayor Smith was the first to break the silence: "I wonder if everyone's heart was beating as hard as mine was as I sat and listened to that. I have never heard a more ignorant talk in my life!"

Given what we know about the world back then, I can hardly believe that to be literally true. But it is possible that the debate over open housing only brought such attitudes to the surface.

Olympia along with Thurston County, Lacey, and Tumwater, would end up passing Open Housing ordinances in 1968. The effort here was part of a longer effort nationally and statewide to break apart racist housing practices.

Lacey, on the other hand, has more racial diversity in general. Specifically, Lacey has more neighborhoods with higher concentrations of non-white residents.

When housing activists were lobbying our local governments for open housing rules, Lacey held back at first because the leaders of the new city (only founded in 1966) were under the impression that Lacey already was open to all races. They passed the open housing rules anyway.

The housing practices that Amanda Smith and other Olympians were trying to prevent by adopting Open Housing rules in the 1960s were in reaction to decades of racist practices. It seems that at least on the surface, we're still seeing the impact of these practices decades later.

Here is a deeper dive into these practices and how they worked:

(African American residents) put the blame for the trend toward a (racially segregated) ghetto squarely onto the practices of some real estate businessmen...

What is happening, they say, is that real estate salesmen are trying to steer Negroes into certain areas while at the same time urging whites not to buy there "because Negroes are moving in." A check with some whites who are hunting houses confirms this.

According to at least one Lacey city councilmember in the 1990s, Lacey was one of the places where real estate agents would steer minority customers.

2. There were certain neighborhoods in Olympia that as late as the 1940s were officially off-limits to anyone who was not white.

This is by no means a comprehensive list, but while it didn't seem to be common practice, there were a few neighborhoods in Thurston County that has racial covenants. Two of these were in Olympia, and a third I found was Beachcrest, north of Lacey.

Stratford Place, one such neighborhood just north of Olympia High School, had these racial covenants baked in. 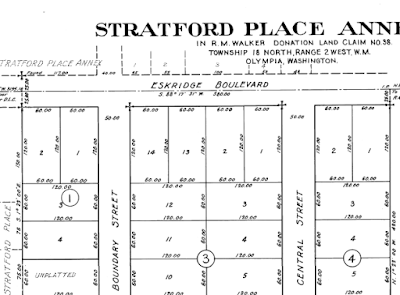 Another neighborhood just up from the end of West Bay Drive, also advertized homes based on racially exclusive covenants.

When you look at how widespread this practice was in King County, I was a little surprised I could easily find more examples in Thurston. There is a lot of history behind racial covenants, and this paper is a great long walk through their use and eventual rejection.

Moving on from the 1960s, we continued to have housing debates in Olympia. But as they continued, they had more to do with density and liveability than they had to do with (one the surface) race.

Less than 10 years after Olympia, Tumwater and Thurston County passed Open Housing ordinances, Olympia began a long debate about multi-family zoning throughout the city. While this debate mostly centered upon income (and sometimes crime), it certainly had the same structure that the debate around anti-discrimination fight had in the late 1960s.

The 1970s saw the largest influx of new residents in Thurston County's history. It changed the nature of our communities and it drove a historic increase in higher density housing types in Olympia. The historic nature is true because after this influx we made most of these housing types (duplexes, quadplexes) illegal through most of the city.

One term that got thrown around during the housing debate in the 70s and 80s was also "ghetto." While the term in the 1960s obviously meant a neighborhood with a large non-white population, what did it mean in the 1980s? Were our anti-density rules stemming from that era racially motivated? Obviously, on a certain level, they were motivated out of a fear of crime and nearby poverty. But how far did we grow in just over 10 years?
Posted by Emmett at 11/24/2019 07:43:00 PM

Thanks Emmett, for shining a light on this subject.

There's more to know about how those open housing laws were passed -- heroic African-American leaders like Barbara and Virgil Clarkson, Thelma and Nat Jackson, and some strong white allies made it happen. Their courage is an important part of this story.

Thank you for this research, it's fascinating and revealing. You asked a series of questions in your conclusion that are important, I think.

Currently I'm reading, "Vice, Crime, and Poverty," and, to paraphrase, the "underground" narratives were invented and shaped over time ultimately to serve the powerful. It seems to be where those questions lean. I'm also trying to grasp the concept of epistemic violence; where social-scientific data is utilized to problematizes the "Other".

The reason I write is to confirm my admiration for your contributions. But I cringed slightly after reading the second to last sentence. It seems to confirm a bias that I think you tried to reveal in past policy decisions. I could be wrong.

I think it just recognizes that the biases existed. Despite the policy victory in the late 60s, the broader planning decisions in the 70s and 80s bent towards injustice based on bad biases, assumptions and fears.