Tract 105 in Olympia. Or a story of how the nodes argument of density is racist

Last week I wrote about how on the macro-level, Olympia's neighborhoods are racially segregated along density lines. The more single-family homes in a neighborhood, the higher percentage of white people that live there. And now I've found an example of how adding high-density housing in one neighborhood, and preserving single-family housing in the neighborhood next door, has a predictable impact on racial make-up.
Up until the 2010 Census, Tract 105 on Olympia's westside was one tract. But, since then it has been split into two tracts, 105.10 on the west and 105.20 on the east. 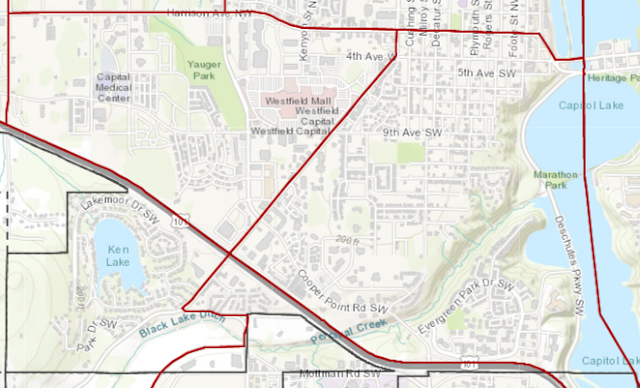 The two new tracts are split by Black Lake Boulevard. They range from the older residential neighborhood on a bluff over Capitol Lake to newer neighborhoods around Capital Medical Center and Yauger Park.
And, their journeys since their 2010 schism show how our current housing policy, especially the "nodes" approach, results in more white, single-family neighborhoods. While our intention hasn't been to create zoning that segregates on racial lines, that is what we've done.
The nodes approach to growth and density argues that we should build extremely high density near Capital Mall, the far Eastside and downtown. Then we won't have to allow for more reasonable increased density in exclusive single-family neighborhoods.
105.20 has been fairly static for the last 10 years in terms of available housing. It includes many older, largely single-family blocks. Before the 1980s, these blocks would have slowly densified as older single-family houses were replaced by duplexes, quadplexes, and small apartment buildings. This was the trend that was stopped forty years ago when we downzoned many near-downtown residential neighborhoods.
105.10 started the decade as a mostly commercial tract with a mobile home park and a few apartment buildings. Also, several undeveloped green zones. Since then, it has added a couple of new apartment complexes along either side of Capital Mall Boulevard where trees once stood.
A major portion of 105.1 in 2010: 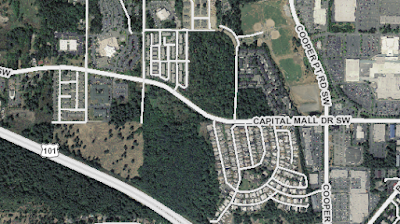 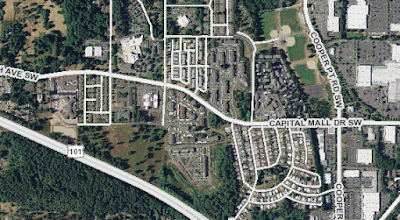 Both tracts also began the decade in significantly different spots, racially speaking. 105.20 was comprised of just a hair less than 80 percent white people, a lower percentage than a city on the whole. 105.1 started as an extremely white neighborhood, clocking in at almost 94 percent.
Since then, they've gone in completely different directions. 105.1 became strikingly more diverse in seven years, with its white population dropping to 81 percent. 105.2 went in the opposite direction, with its white population growing to almost 86 percent.
It looks even worse for 105.2 when you look at the raw numbers. The total number of non-white people living in 105.2 dropped by over 200 people between 2010 and 2017. At the same time, 150.1 went up by almost the same amount.
This has all happened as Olympia as a whole has slowly become more diverse, going from 85 percent white in 2000 to 83.6 percent white in 2010 to 82.5 percent white in 2017.
One neighborhood built high-density housing (in a node) and became less white. The other followed the node approach by protect existing single-family homes and became more white.
It is also worth noting, that while 105.2 got whiter in the last decade, it also includes a significantly sized apartment complexes. These are mostly concentrated along Black Lake Boulevard and Evergreen Park Drive. But, if you look back at the block-by-block data available from the 2010 Census, you see a stark racial breakdown even within 105.2.
The blocks zoned single-family are much more likely to be whiter.
From JusticeMap, darker blocks are more white: 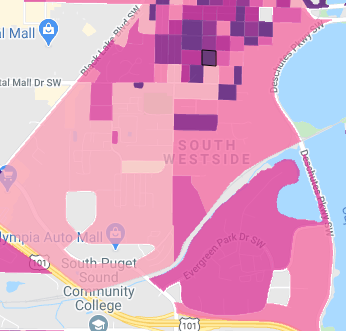 From Thurston Geodata, the red are single-family homes: 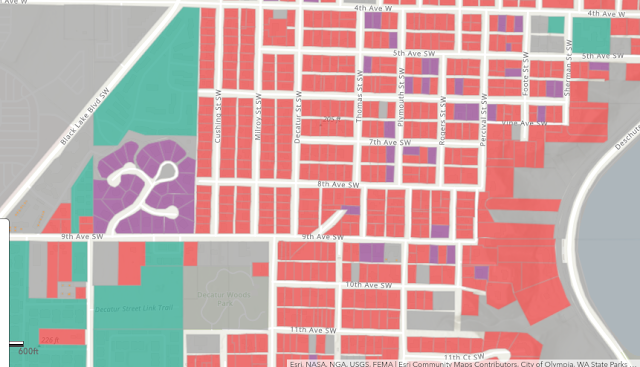 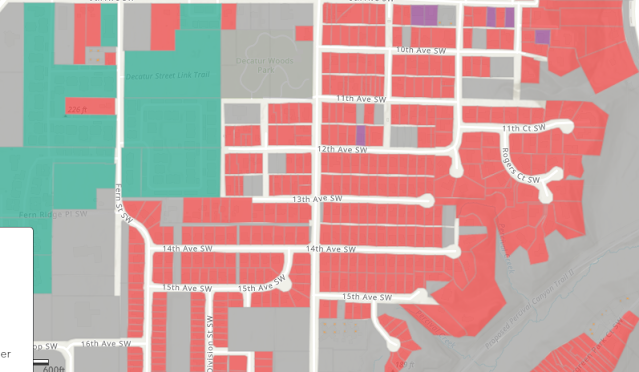 The further you get in the single-family home portions of 105.2, but especially north of 9th Avenue, the more likely blocks are going to be white.
So, if you got this far, it's clear that as we build denser housing outside of single-family neighborhoods (and in an environmental lense, in what used to be a forest), we are also keeping single-family neighborhoods white.
There is no law in Olympia that some neighborhoods are reserved for white people. But, by focussing building higher density housing outside of these exclusive single-family zones, this is what we're doing. This is the current "nodes" strategy, or has some have called it "density done right."
And, this is the intention vs. impact this when we talk about racism (here and here).
I think it's helpful to quote Rachel Cargle here in her frame on racism:

Recognize that even when your good intentions are truly good, that’s totally meaningless. Try this on for size: when you accidentally step on somebody else’s foot, you do not make your good intentions the focus of the episode. Instead, you check to make sure the other person is OK, you apologize, and you watch where you’re going. You don’t get annoyed with the person you stepped on because you caused her pain or declare that she is too sensitive or defend yourself by explaining that you meant to step to the left of her foot... But I’m a nice person does not cancel out the fact that you’ve silenced, marginalized or used your privilege to further disenfranchise black and brown people, whether you intended to do it or not.

We don't build neighborhoods with racially exclusive covenants (but we did once). There is nothing in our Comprehensive Plan that says it's our intention to build super white neighborhoods. But by not allowing even modest high-density housing throughout our city, we are doing a lot of damage.
Building more affordable housing types (literally anything other than single-family homes) would allow a more diverse population to grow. And, in conclusion, I'm just going to leave this here: being able to live in a walkable, liveable (non-node) neighborhood is good for everyone.
Posted by Emmett at 6/13/2020 01:50:00 PM

Emmett, thanks for this analysis.

Correct me if I'm wrong, but from your article I infer that current arguments against housing density in traditionally single-family neighborhoods are in turn racist. This makes me wonder whether there has been any substantive data collection regarding racial perception connected to addresses in Olympia, e.g. can the case be made that some neighborhoods are more explicitly racist than others? Another interesting data comparison could show the relationships between rental, leasing and home sales availability in these neighborhoods compared to the race of applicants, e.g. could it be shown that there are people of color trying to move in but being prevented on the apparent basis of qualifications, when its actually racism?

Anyhow, thanks again for this analysis--its urgent and necessary.

The General Social Survey includes questions about the race of neighbors and willingness to live on racially diverse streets.