Zoning and race in Olympia, WA

Last November I posted about the history of race and housing in Olympia. I tracked local ordinances to outlaw racial discrimination in housing. I also wrote about some housing developments that have racially-based covenants.
One of the things I noticed in these racially-restrictive covenants is that they always came with another requirement, that the neighborhood also be exclusively single-family homes. Not every restrictive covenant I found had a racial component, but every one with a racial component also required single-family homes.
In fact, in Strattford Place near where I live, they put the single-family requirement at the top of the list:

Thankfully, racially restrictive covenants are illegal. But, since the 1930s (when racially restrictive covenants were en vogue in Thurston County) single-family zoning has increased in popularity.
Over the years, we have created zoning laws that restrict housing to (largely) only one type: single-family homes. I want to back up and reiterate this point. In the past, housing in Olympia was much more diverse. But, in the 1970s and 80s, we downzoned much of the city to outlaw anything that wasn't a single-family home.
So, think about this next phase in three steps:
So, what happens when you compare race with housing type in Olympia?
This may seem obvious, but the more single-family homes there are in a neighborhood in Olympia, the whiter that neighborhood is. 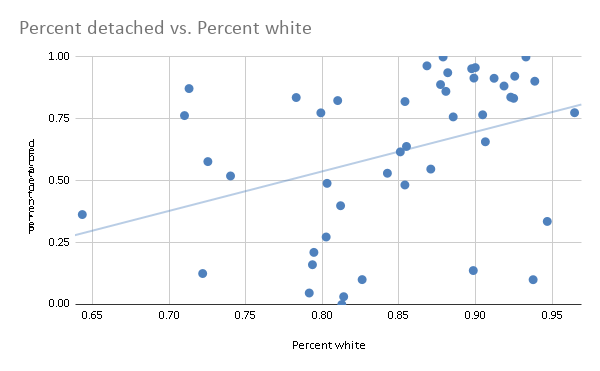 Thank you for researching this.

There is little question that the additive manufacturing space will continue to develop and grow within the coming years, but will it render subtractive manufacturing methods like CNC Machining obsolete? In truth, precision CNC machining most likely going} extra necessary to the additive manufacturing process than you may assume, as a new new} process called “hybrid manufacturing” is rapidly taking hold within the industry. The custom-designed eMachineShop CAD platform is nearly as highly effective as any normal CAD software program. It’s also fairly simple to make use of for hp stylus pen traditional manufacturing, as it comes with convenient templates for widespread components and an instant manufacturability evaluation function.