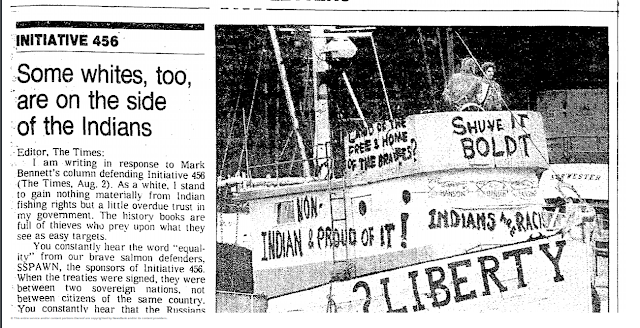 In Washington state law, there is a section that is unenforceable and takes a clear shot at tribal treaty rights. In addition to telling congress that steelhead should be a nationwide gamefish, RCW 77.110 declares that treaties should not be taken into consideration when managing natural resources. And now HB 1172 looks like after more than 30 years, the unlawful and racist language will be finally removed from state law.

The section of law was added in 1984 after a successful citizen's initiative campaign.

Looking at the history now, it is easy to look at Initiative 456 as a sort of temper tantrum on behalf of sports fishermen and allied anti-tribal groups. It was legally dead once it had passed, and it was opposed by the vast majority of Washington's institutional powers. By the time it was even proposed, the treaty tribes and the state of Washington had already started up a cooperative process to equally and legally share salmon harvest.

Washington had just completed a decade of final conflict between the state, the federal government and treaty tribes. After a violent police riot in Tacoma in 1970, the federal government filed suit on behalf of the tribes. U.S. v. Washington was decided in 1974, reaffirming the tribes' treaty rights to fish. After years of defiance by the state, the Supreme Court finally put the legal debate to bed in 1979.  And in 1983, the tribes and the state decided to finally get out of court and hash negotiate fishing seasons each year.

This dawn of cooperation, where tribes and the state would treat each others as equals, was the setting where Initiative 456 found itself. It advocated for conflict over cooperation. It attempted to turn the state back into the antagonist that drew a comparison between Washington State and Texas fighting desegregation orders.

It wasn't clear even on election night 1984 that no one knew if I-456 would ever have any impact, other than sending a message. And, it was a pretty clear message. All 39 counties in the state passed the initiative, but it wasn't even clear then if they were fully endorsing the message or just missing the point. From the Seattle Times:

On its face, it hardly sounds like an earthshaking notion. And it is quite possible that many who go to the polls next week will not connect the initiative with the controversial Boldt Decision.

"It kind of reads like Mom and apple pie and that's why we wrote it that way," said Dale Ward, with Steelhead and Salmon Protection Action for Washington Now... sponsor of the initiative.

Looking back now, it seems like a shrug of the shoulders. Salmon co-management survived. It is easy to argue that treaty tribes gotten more politically relevant and economically stronger since 1984.

But it is still important to remove the unlawful laws from our books because the line of thinking that passed 456 in 1984 is still alive today.

Both Bob Williams and Ken Eikenberry (the 1988 and 1992 Republican candidates for governor) insisted that they would enforce I-456. While Bob Williams drew less than 40 percent and was a state legislator when he ran, Eikenberry was already a statewide elected official, and he represented a completely different part of politics. He was the Republican chair before succeeding Slade Gorton as state attorney general. His endorsement of I-456 meant that anti-tribalism was still very much inside the conservative party.

"I think the tide is turning our way,'' she said. "The treaty situation had to get to the point where abuses are so rampant large numbers of people are affected.''

"I think within 10 years we'll have from Congress a fairer, more equitable definition of treaty rights...

As soon as he could in 1985, Senator Slade Gorton took a shot at having congress answer the call of I-456. He introduced a bill to decommercialize steelhead in 1985. That effort didn't get very far. It even created a split between anti-tribal conservatives and conservatives that were more will to just move on.

Sen. Slade Gorton's bill to bar Northwest treaty Indians from fishing for steelhead commercially  -- a bill that isn't expected to go anywhere in Congress -- drew a formidable array of opponents at a Senate hearing here this morning

The other Republican senator from Washington, Dan Evans, joined an unlikely alliance of the Reagan administration, the timber industry, environmentalists and Northwest tribes in denouncing the proposal.

3. Anti-tribal sentiment is still there

We're still dealing with anti-tribal racism, and it is still centered around the sentiment of I-456, that the tribe's and the state negotiating as equals is not how it should work. This report draws on a lot of research to tell the story of what happened after a breakdown in negotiations in 2016. When negotiations shut down, both the state and the tribes were left off the water.

In the wake of press coverage of the closures, anti-Indian bigotry reared its ugly head in comments posted in online news forums. Reminiscent of previous mobilizations against tribal members, comments ran the gamut from stereotypes, to advocating an end to tribal rights, to calls for violence against tribal members. Particularly troubling, a number of bigoted statements were made by people whose Facebook page “likes” indicate some level of support for far right paramilitary and racist causes. While the Coastal Conservation Association and Puget Sound Anglers have not expressed the kind of bigotry documented below, neither have they addressed or condemned the vicious nature of this response. By also distorting facts about treaty fishing, pushing for a greater share of tribally-allocated fish, and flirting with the language of the organized anti-Indian movement, the CCA’s actions can, in fact, promote such bigotry.

What happened next was an onslaught of violent rhetoric aimed at tribes. The report shows in stark detail how many of these online commenters were involved with far-right militaristic causes. Only five years later, we can see how the irresponsible behavior from organizations like CCA and Puget Sound Anglers could have easily spilled over into violence.

4. People are still suing to intervene in U.S. v. Washington

Just yesterday, Fish Northwest filed a 60-day intent to sue over the current cooperative state tribal fisheries negotiations. The lawsuit takes direct aim at the complicated relationship between the state and the tribes, the federal government and its trust responsibility, the Endangered Species Act and regional fisheries management. Bottom line of the lawsuit is, though, that when Fish Northwest disagrees with the results of the negotiations, it is the tribes' fault for not playing fair. The refrain of "treaty abuse" in the 1980s has turned into a new line in this lawsuit: "The Current Season Setting Process Is Weaponized Against the Citizens of Washington."

Or as the once relevant Salmon and Steelhead Journal puts it:

Our negotiators managed to win us some token fisheries, but let’s face it, there are enemy tanks on the Champs-Élysées. And the rationale, the casus belli, is exactly what you’d expect from an aggressor who is holding all the cards. This is because of poor runs, right? Climate change? The blob? Not really. What the tribes are saying is essentially, we’re going to screw you because you’re pussies and because you’re pussies, we can, and because we can, we will.

So yeah, I-456 may itself be dead law. It never had any real legal impact and the effort to decommercialize steelhead never went anyway. But, the spirit of I-456 lives on. To this day, sport fishermen do not see tribes as partners in fisheries negotiations. Once there is a result they do not like, they try to end run around decades of negotiations and case law to get what they want.

And, by spreading misinformation, they put lives at risk. So, when we look at removing the laws that I-456 put into place, I'm super in support of that.