Olympia’s rising tax exempt skyline that will start paying off

One thing about Dan Leahy's analysis of the multifamily housing tax exemption that bothers me almost two years later is that he stopped at the eight-year life span of the tax exemption.
He illustrated that over the life of the exemption, the tax-paying owners (for example) of the 123 4th would not pay the $2.2 million in taxes owed on the improvements they made to the three parcels they built on in downtown.
Dan's analysis didn't make obvious that they are still paying some taxes, but only on the value of the property as if it was still a parking lot. Which I think is pretty interesting, because now we can figure out the impact of taxes would be lost if the building stayed a parking lot instead.
So, this is an absolute back of the napkin analysis, but based on the most recent valuations, the subsidy would begin paying off in 2032, seven years after the exemption ends. It would take less time to "pay off" the exemption than its entire lifetime.
Over 40 years, the increased value of the property (again, back of the napkin) would net the city over $7 million in taxes. 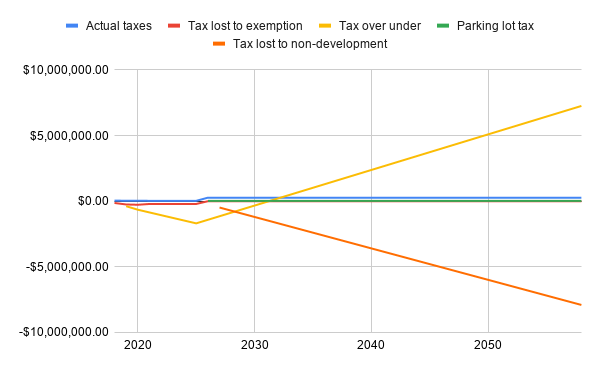 Here is my spreadsheet.
The difference in the tax payments on a mixed-use apartment/commercial building and the tax payments of a parking lot would be about $200,000. So, over the 40-year time span, the taxes lost by not incurring the short term loss lost of $2.2 million that the tax exemption represents would be just under $8 million.
We'll never know if the 123 4th would have been built without the 8-year tax exemption. Even the most thoughtful analysis of the statewide program could not figure out if it actually increased development. What we can point to was the trajectory of downtown Olympia up until the point the exemption was available in 2007. New housing had not been coming downtown for years.
We can also see that given the decades of full-rate taxes these buildings will be paying, the so-called subsidy will be paid off sooner than earlier analysis would imply (even given my possibly rosy assumptions). Big buildings pay way more taxes than parking lots. That's my big takeaway.
Posted by Emmett at 2/06/2021 03:17:00 PM