Lacey has been bigger than Olympia for some time, and why that matters

Once the actual census data is publically released in August, we're all going to hear officially that Lacey has more residents that Olympia.

Lacey has been nipping on our heals for decades, and has significantly closed the gap in the last 10 years. In 2010, Lacey was within 5,000 of Olympia. This has narrowed to 2,000 two years ago as both cities grew.

What is already unofficial (but will become official in August) is that Lacey has 3,000 more residents within its city limits than Olympia. Mayor Andy Ryder posted the news in a comment thread late last week: 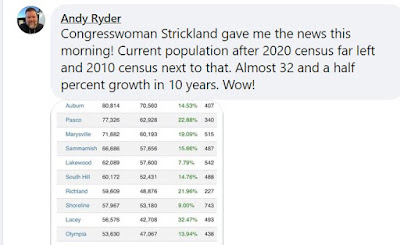 Judging the meaning of pride over the raw number of people living in your city notwithstanding, it is important to point out that Lacey should have reached this milestone years ago.

And that is because Lacey has a massive urban area in its urban growth area (UGA) that is has never been annexed. When you count up everyone who lives in Lacey or within its legally defined UGA, there are over 90,000 people. Olympia only has about 66,000 all told in our UGA and city proper.

So, the question remains, if Lacey has annexed much of its UGA earlier on, when would it have passed Olympia? My guess is that would have happened sometime in the early 1990s.

Back in 1990, Lacey has 19,000 people inside the city borders and Olympia had 33,000. So, from there I have to guess how many people lived in the portion of Thurston County that juts up next to Lacey along Martin Way on the way out to Hawks Prairie. Thankfully, most of that area is part of the census as the Tanglewilde/Thompson Pace Census Designated Area.

Currently, this area (two 1950s era developments that straddle Martin Way east of Carpenter and west of Hawks Prairie) is over 5,800. But in the 1990 census, it was slightly larger, at 6,061. So, when you pack together the other urban and suburban portions of the UGA that aren't in Tanglewilde and Thompson Place (including the Meadows), it isn't a stretch to assume you'd make up that 14,000 person gap with Olympia.

I didn't pick 1990 as an arbitrary date. I might be off by a few thousand or so in my estimate. But 1990 is a particular time for Lacey and its decision in how it was going to grow.

Let me show you a few maps. 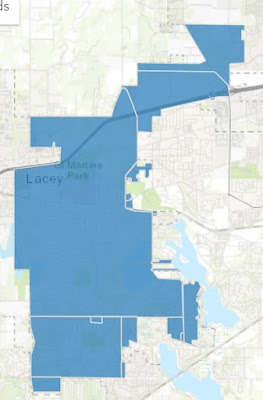 This is the land that Lacey has annexed since 1990: 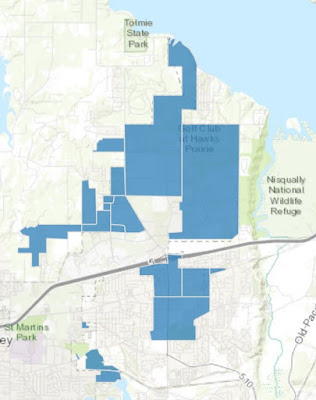 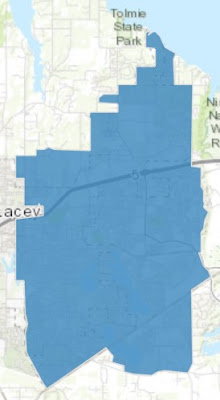 And this is the density inside both the city and the UGA: 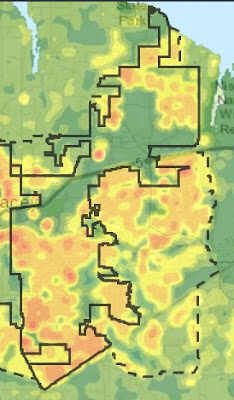 Here is the story that these maps tell me. Looking east in 1990, Lacey had a choice in how it was going to grow:
Obviously, the city fathers in Lacey chose the latter option. So it took until today for those square miles gobbled up after 1990 to fill up with enough people for Lacey to finally surpass Olympia.
But here is the coda about why this discussion really matters.
Here is the Justice Map image of the 2010 racial makeup of northern Thurston County broadly (the darker the colors, the more white):

Generally speaking, the further east you get, the less white the neighborhoods are. Until you get to the far edge (beyond Tanglewilde) there are places that are majority non-white. For a county that is 82 percent white, this is saying something. I don't want to point out that Lacey is not a diverse city. Standing at 74 percent white, it is the most diverse city in Thurston County. But, in deciding to annex north of the already established neighborhoods east of the city, it decided not to reach out to even more diversity.
To Lacey's credit, they are starting to annex into these areas. It is a good thing because it not only vaults Lacey past Olympia in population, but it also brings city services to places where there should be city services.
Posted by Emmett at 5/31/2021 08:26:00 PM No comments: