A candidate for Olympia City Council recently released a list of ideas to prevent out-of-towners and corporations from buying homes in Olympia. The end would be to make housing was more affordable by making it harder for people who don't live here to bid up houses. This is an interesting line of thinking, but first I wanted to dive deeper into the phenomena he describes. His post leans to heavily on anecdotal evidence of distant corporations snapping up single-family homes.

Thankfully, Thurston County GeoData allows you to download the entire parcel database. This can tell you who bought any piece of property, when, and for what price. Here is what I found:

1. More rentals, more out-of-state buyers. But within the normal range.

Both the number of out-of-town buyers and homes simply bought for rentals has gone up in the last year. That said, they've gone up to a point well within the range of what you would expect in any given year since 1995.

For rentals, I looked at single-family home parcels where the owner's address did not match the address of the parcel: 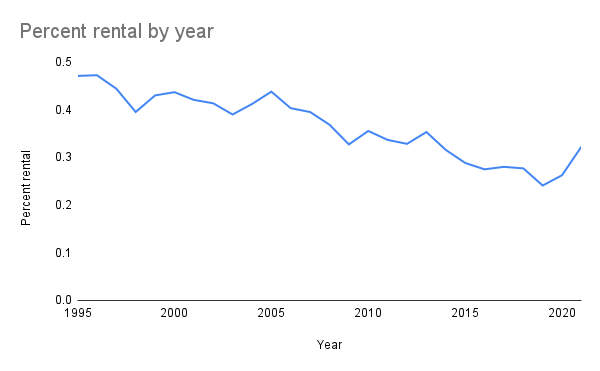 From the above chart, about half the percent of single-family homes in a given year are purchased as rentals. I assume there is a skew towards homes purchased further back to be listed as rentals since many homes would have been bought and sold several times since 1995. So, if a house today has a sale date in the 1990s, it is likely a long-term rental held by the same person. But you can even see in recent years (say since the economic recovery in the mid-teens) there was a slow decline in the number of single-family homes bought for rentals, with a slight uptick this year.

For out of state owners, I just looked at the owner's state: 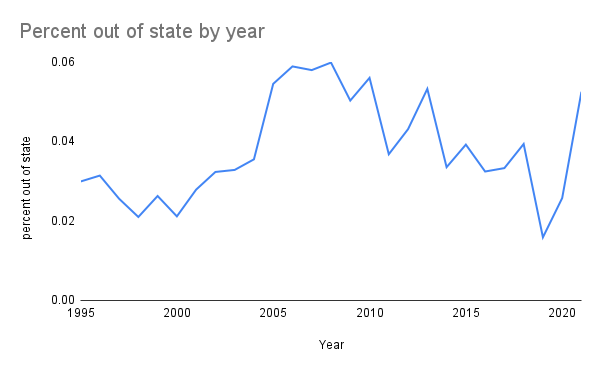 Again, there was year-by-year data available back until the 1990s, and houses with sale dates that far back are long-term purchases, probably making them more than likely to be long-term rentals. But even these have owner addresses more likely to be in Washington. And again, there is an uptick this year in out of state purchases. That said, the vast vast vast majority of single-family home purchases are made by residents of Washington. The uptick this year when from two percent to only five percent of all purchases.

2. Two major out of state corporate buyers, but in context not a big deal for Olympia or the county

Lastly, I was able to take a look at who the buyers had been in the last year with out-of-state addresses. The GeoData spreadsheet does not include names, only addresses. But with a bit of sleuthing, I was able to find two  corporate buyers that are currently active in the Thurston County Market. Home Partners and Invitation Homes (as of early June) own 71 parcels with single-family homes across Thurston County purchased since the beginning of the pandemic.

Again, that is definitely a number, but when compared across all purchases since March 2010 (arbitrary date I picked to put a pin in the current pandemic-fueled housing market), their total purchases only count towards 1.1 percent (71 out of more than 6,400 transactions) of the market.

Also, the map of their purchases are telling:

Most of the homes purchased by these two corporations are outside of Olympia. In fact, they are mostly in newer neighborhoods on the fringes of the advancing wall of sprawl of our community. The actual parcel-by-parcel impact, at the very least, is being felt in Lacey, Tumwater and the unincorporated county, but not Olympia.

But why should this worry us? Is it because we think all homes should be owner occupied?

I think we (or at least the linked-to candidate above and their supporters) have a bias in how they thing about apartments and single-family homes.

Most of the large apartment complexes being built in Thurston County are built, funded, and operated by massive out-of-state corporations. When I lived in a fairly new apartment complex in SE Olympia, I sent my money to a corporation in Texas with a regional office in Seattle. While there had been some neighborhood-level hand wringing about that fairly modest complex being built because of traffic and unsavory renters, none of the concern was about whether the apartments would be owned by an out-of-state corporation.

But there is concern about out of state corporations owning single-family homes, because there is a mindset that these should be owner-occupied. This is the natural order of things.

There is little to no benefit for our city to be bought and owned by outside investors and incredible negatives. It creates a dynamic where people such as teachers are being outbid and forced to rent rather than building equity in a home they own and deepening their roots in the community or being forced to live far outside of town and commute great distances. That is a burden on the environment and our infrastructure as well as a cost on the teacher.

"... forced to rent rather than building equity in a home they own and deepening their roots..."

I'm not saying institutional corporate ownership of homes (single-family or apartment or in between) is a thing we need to encourage more of, I'm just saying we should examine where we decide to wring our hands.

I appreciate the data work very much. We need more local journalism doing this. I don't totally agree with the assessment of the findings. Those sharp turns at the end seem especially sharp! I also disagree that I only am worried about ownership of homes, I also think that owning apartments, condos, is also important if not more so! For many people owning an apartment is exactly what they need. For others, especially folks who are in the trades, small business people, like me with arborist work, who need a shed for tools and such, that's just not a good fit. Unless we figure out better work arounds, tool shares, shared work shops and such. Here's my article in furthering this important topic. https://brucecampaign.org/?p=198

What "bit of sleuthing" were you able to do to find the institutional buyers? Can you elaborate on your methodology here?

I looked at addresses that were from out of state that appeared more than once. Then I googled them.