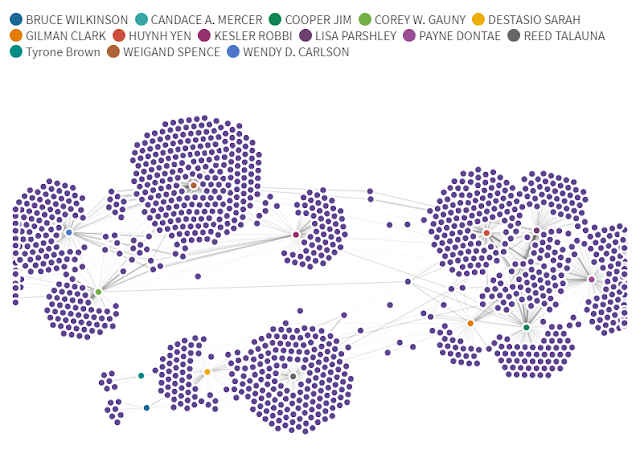 Over the last few days, I've been pulling down Public Disclosure Commission data and putting together a network graph of financial contributions among city council candidates. This illustrates the flow of individual contributions to campaigns and between candidates. This shows, in a broad sense, of how candidates are connected by who is contributing to them. I took some care to clean up the data (so contributors aren't showing up more than once) but there might be some small errors.

1. There definitely are three primary lanes in the races. Or at least there was before the winnowing of candidates in the August Primary. I'd been using a shorthand to think about candidates running for city council. They were either in the right-hand side, mainline/incumbent or left-hand side lane.

Turns out the contributors thought the same thing. Contributions for all the right-hand side candidates (Mercer, Gauny, Kesler, Weigand and Carlson), mainline (Cooper, Gilman, Huynh, Parshley and Payne ) and left-hand (Wilkinson, Destasio, Reed and Brown) are generally distinct from each other. When there are connections, they are connected through the mainline group. There were a lot of contributors that gave to multiple candidates, but mainly to either the left or right and the mainline. Out of more than 1,200 individual contributors, there was only one that gave to both left and right.

2. The mainline group is much more cohesive than either the left or the right. This makes sense that the middle would be cohesive, most of them serve on the city council now. They're also contributing to each others' campaigns. But, the lack of cohesion between the other lanes, when there policy positions seem so well in sync, seems weird.

3. Just poke around, see what you find. There are a lot of random things to see in the chart.

Online and cell casinos 윈윈벳 use credit cards and on-line funds to play on-line slots. You will most likely find no distinction between the gaming expertise in Indonesian casinos and other casinos in regulated markets. We can also transfer private knowledge in reference to a business division or another basic business change. Delaware and Nevada in 2017 to share their pools of players, improve their progressive jackpots and rather more. 000 sqm nation has 53 hotel rooms with in depth conference rooms, 4 eating places and a couple of|and a pair of} swimming pools.