In response to "In Defense of Priest Point Park" 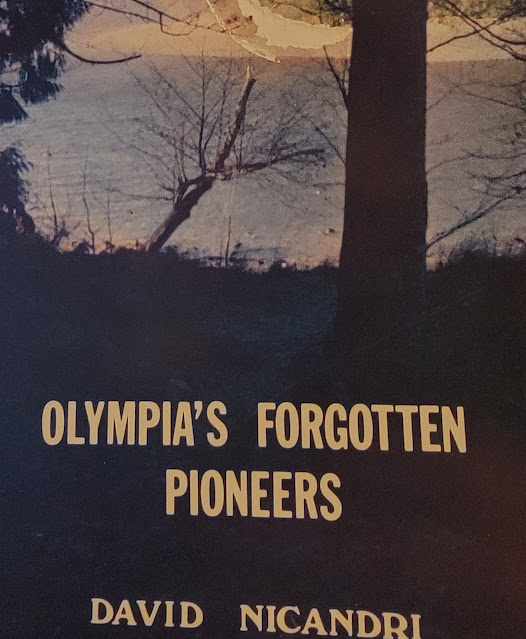 In the debate over renaming Priest Point Park to Squaxin Park, David Nicandri has written "In Defense of Priest Point Park." I'm glad David's thoughts were finally posted. I had heard through the grapevine that he had come to a position counter to honoring the wishes of the Squaxin Island Tribe. His long-time work in local and statewide history makes his opinion worth weighing.
That said, I want to offer some counterweight to his post.
In the blog post below, I rely on David's own "Olympia's Forgotten Pioneers," a history of the Missionary Oblates of Mary Immaculate (OMI) in Olympia.
First off, setting the stage for the arrival of the Oblate Father Pascal Ricard in Olympia, Nicandri leaves out important context. First, he says coming to North America from France was against Ricard's wishes. This is true, but because he was in ill health. The OMI was primarily a missionary order, so being sent overseas was not something a member of the OMI order wouldn't expect.
Much of Nicandri's post contextualizes the relationship between the priests in Olympia and the territorial government during the Puget Sound and treaty wars. You would think that, after reading David's post, that the OMI priests were working counter to the government of Isaac Stevens and for the tribes. But, even Nicandri's own book paints a much more complicated picture.
The relationship was more cordial than that. Each side realized the benefit of the other. During the treaty work at Walla Walla, he writes, "The OMI and Stevens were virtually a team; both told the Indians to listen to and obey the other."
At best, the priests were complicit in the work of the territorial and military leaders to force the tribes to sign treaties and move them onto reservations. The work being done by missionaries like the OMI priest made the tribes much more likely to also do the wishes of the secular government.
Nicandri:

On one occasion, Ricard inscribed "we have always said to the Indians, do not aggravate the Americans and they will not both you. If someone hurts you, complain to the authorities... even to the governor himself, and you will be rendered justice," although he knew the Indians were not receiving it.

Granted, the relationship between the American population and the OMI priest in Olympia was not always cordial. Because of their closeness to the tribes (and likely just plain old anti-foreign, anti-Catholic bigotry), white people in Olympia felt threatened by the priests. But at the end of the day, the American territorial government and the OMI priests were partners in the cultural damage done to the tribes.
Lastly, I want to address the broader thoughts Dave brings up earlier in his piece.

The most grievous was the hubris of cultural superiority, originating in the ethos of his time and civilization. This pattern was so common that Pope Francis is coming to North America this year in recognition of this Truth in the interest of Reconciliation.

Before we judge Ricard too severely, forbid that any of us should be judged for our actions by the standards of some future posterity.

This is exactly how we should be judged. And this is the entire reason I study history. It is cliché to say that thing about repeating history when you don't learn it well enough. And I don't think it's an extreme statement that we still have a lot of divergent ideas about the place of religious minorities in America.

Nicandri's "judged by our current actions by a better future" is a tamed down version of "if we pull these statues down, we'll forget our history." There is a big difference between honoring something by naming a park after it or building a statue and "forgetting history." We don't build statues to assassins, for example, but we do include them in our history. We aren't taking "Olympia's Forgotten Pioneers" out of the library and burning it. We are simply showing that we have a better understanding of history because we no longer want to honor religious colonialism.

While what could be done to help Indian people in the 1850s may have been morally complex to French priests, we have the luxury of clearer vision. Nicandri in "Olympia's Forgotten Pioneers":

One might cynically suggest that Ricard was a contributor to the deculturalization of a whole people. But he and all the OMI realized the futility of the Indian struggle and tried to temporize the effect of white supremacy as best they could.

Ignoring the impacts of missionary work on deculturalization, we today don't have to see the actual request from an existing sovereign tribal government to rename a park as futile.
We don't have to temporize the impacts of white supremacy.  We can fight it.
Posted by Emmett at 4/15/2022 02:11:00 PM