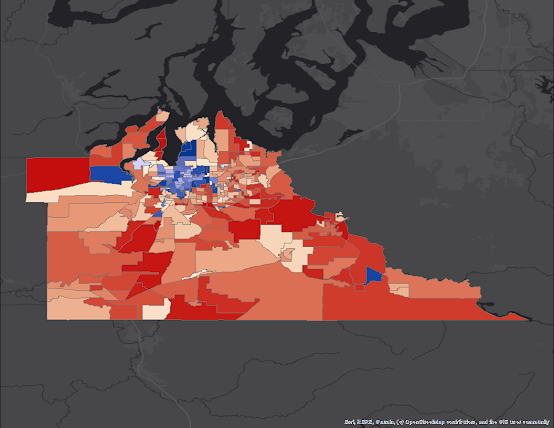 This is a map of election results in Thurston County. It shows a fairly typical result by precinct. More liberal candidates (in this case Joel Hanson in last year's port race) doing well in the urban core and more conservative candidates (Amy Evans) doing well in rural areas.

This is a map of property taxes by acre on the parcel level in Thurston County: 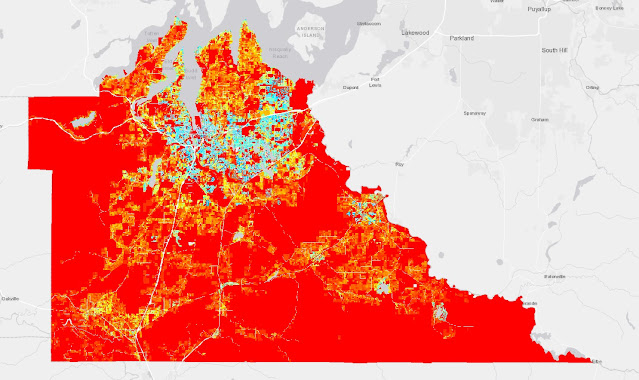 Generally speaking, these are the same patterns. The same places that tend to vote for more conservative candidates also pay less property taxes per acre. This isn't exactly a new concept. Strong Towns, for example, pays a lot of attention to this concept of density paying off for local government finances. Their analysis goes even further and connects a simple tax by acre analysis (which I am doing) and brings in the cost of supplying services to low density rural and suburban areas, which is higher than urban, high density neighborhoods.

Here are a few closer looks, to see how the basic property tax by acre phenomena works. 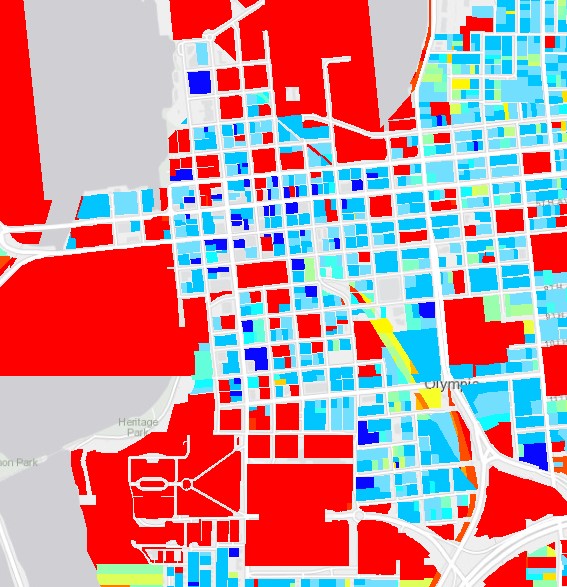 Not only are the vast majority of the parcels blue (relatively high value), there are a lot of dark blue lots (the highest value category). The red areas in downtown Olympia are un-taxed public places like the Port of Olympia, the Capitol Campus and other government owned parcels. They aren't a good counter-example against the phenomena we're exploring here, they are just an illustration of the financial impact of being a state capitol.

Zooming out to Olympia overall now: 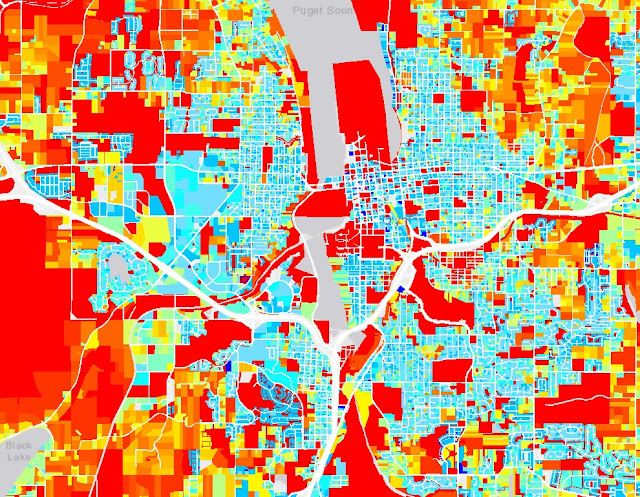 Lots of lighter blue, and most of the deeper blue is either newer developments or nodes of density around lower density, single-family neighborhoods. 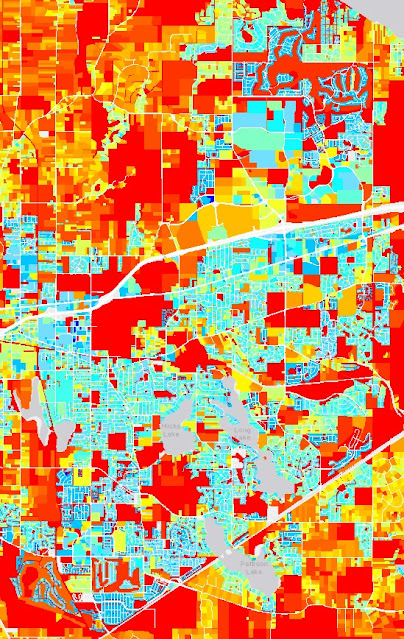 The thing that stands out here to me is the older core of Lacey is mostly lighter blue.

Now the big map for me, the Rochester/Grand Mound area: 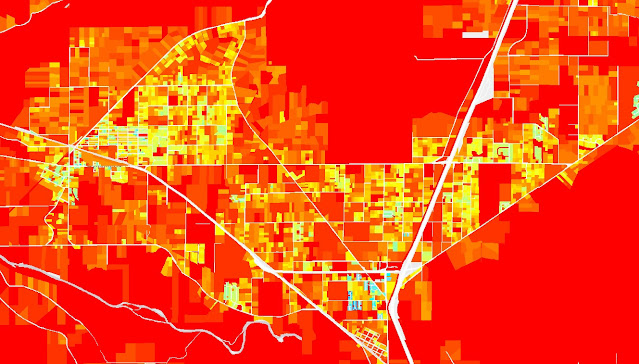 Even though this portion of Thurston County contains a large swath of suburban development on the way to Lewis County, most of the parcels are fairly low value by acre. According to the analyses I linked to above, these areas are more expensive to maintain, but produce less property taxes.
We're familiar with this concept on a macro scale (donor states and counties), but it is interesting to see how this phenomenon exists on even the micro-neighborhood level.
And how does this take us back downtown? This is just another example of how the multifamily tax exception is not that bad of an idea, policywise. A little while back, I did a back of the napkin analysis of how in a very short amount of time, the multifamily tax exemption would start paying dividends financially. The logic is that once the exemption is over, the increased value of the taxed parcel would be vastly more than the previously undeveloped version. By my figuring, it would only take seven years for the improved parcel to pay off the money lost in the exemption. And in the long run, it would a massive financial benefit. Allowing the parcel to stay a parking lot would be the actual drain.
What the tax-by-acre parcel map shows is that the talking point of "existing taxpayer subsidizing downtown high-rises" is a falsehood. On any scale, less dense neighborhoods are "paid for" by denser, more productive ones. The majority of existing Olympians (especially the ones that show up to city council to complain about density) live in unproductive single-family neighborhoods. The subsidy goes the other way around.
Posted by Emmett at 7/23/2022 11:08:00 AM 4 comments: