In my original post about the results from the 2022 general election, I vaguely pointed to results comparing how well successful candidates Sheriff Sanders and Senator Murray did against each other. Basically, both won by doing well in the dense, urban part of Thurston County. But, when you take their precinct results and compare them, you see Sanders lagging behind Murray in those dense neighborhoods and holding on tighter in the rural areas.

Here is the map (with legend!) that compares Murray (doing better in red) vs. Sanders (better in blue). 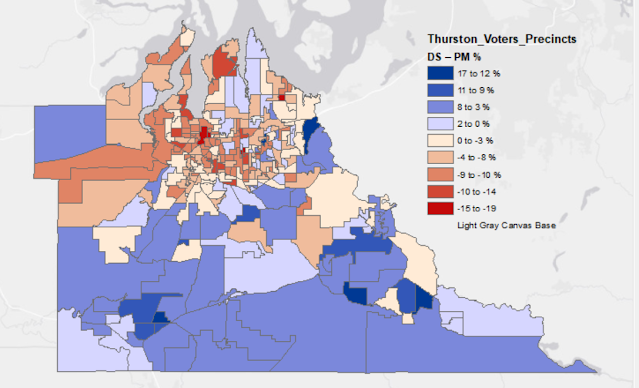 Because Murray did better overall in Thurston County, (58 to 55 percent) it is interesting to look at the places that Sanders not only won overall, but beat Murray. Here is the map with those precincts outlined in red. 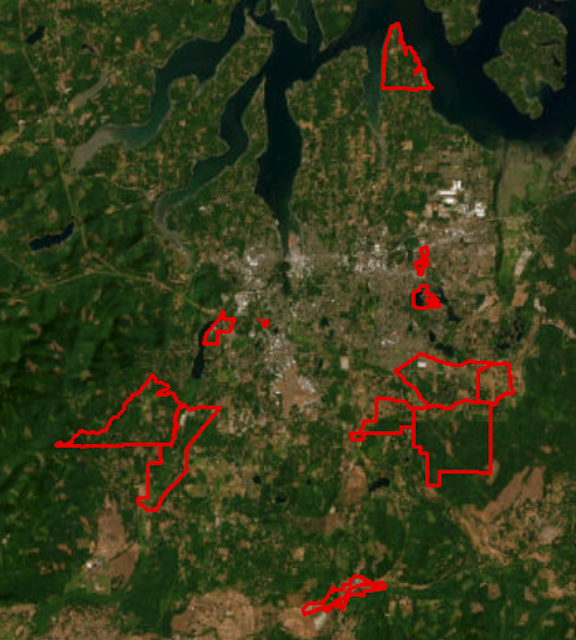 The smallest pockets are places like Kinwood East (on the edge of Lacey) and Simmons 3 (on the edge of Tumwater):
Both of these are annexation candidates that have very few votes (about 90 in Kinwood West and fewer than 20 in Simmons 3). So, dense precincts that, if mixed with a larger city district, would likely have voted for a Democratic Senator.
The next collection are Lacey 28 and Lakeside. Both of these are (aptly described) are lake shore precincts.
What is at play here? Higher property values? The general lake shore politics that gives someone a unique perspective on county government?
Lacey 28 is also the only incorporated precinct that falls into this collection, other than the entire city of Tenino, which is the third collection of precincts in this map. Why Tenino didn't go vote for Murray makes sense, but why it voted for Sanders is worth discussing.
The last collection are the larger precincts around the edge of the urban growth area. I might have added Johnson Point (off the map) into the lake shore collection, but I'll put it here with places like Delphi, Sunwood Lakes and Eaton Creek North.

These mostly wooded or rural precincts are pock marked with surban-esque neighborhoods carved out of the woods. But at least one looks like it could be plopped down directly into Hawks Prairie or Southeast Olympia:
So my guess? These neighborhoods are far enough out of town that their politics would at least be marginally conservative. Or, at least conservative enough for Tiffany Smiley to edge out a win over Murray. All of these precincts were 45/55 precincts for Murray. But, they are also all neighborhoods that depend on the Sheriff's office for police services. And, if they are generally unhappy with the service they receive (because of response times, they are likely to vote for the challenger over the incumbent.
Posted by Emmett at 12/03/2022 12:49:00 PM