Why I wasn't born in the City of Lacey

I was raised in what had been, for like a couple of months, the City of Lacey.

And, by order of the Supreme Court of Washington, is inside the City of Olympia. 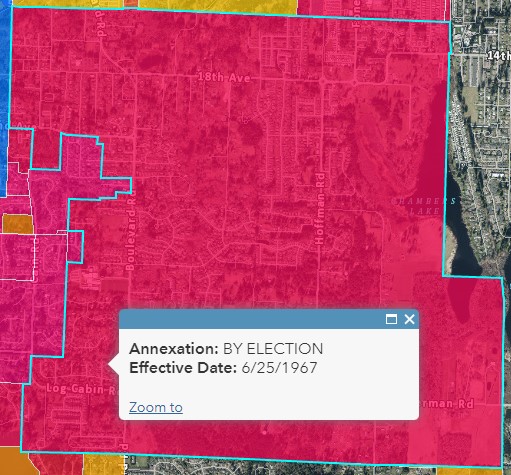 My childhood neighborhood, generally Wilson Street between 22nd and 18th, was part of a push and pull between Lacey and Olympia for a few months in the mid-1960s.

Since the end of World War II and the construction of car-centric neighborhoods, Olympia began pushing out from its original 1890 borders. The city had annexed the area around the State/Pacific split in 1930, but paused until after the war to start grabbing small blocks here and there. But, by the 1960s, the unincorporated neighborhoods that had been built further east (collectively "Lacey") began getting nervous and planning for their own city.

And, what should constitute the future Lacey was pretty broad. In the early days of the planning for the city of Lacey, as early as 1963, the western border of the proposed City of Lacey was Boulevard Road itself, a full 3 miles away from the city's current boundary.

It was in 1964 when the Olympia City Commission pushed east, annexing along Martin and Pacific Avenue, ending as far as Lilly Road on Martin Way. That effort started the official border war between Lacey and Olympia.

Pro-City residents in Lacey pushed for a vote in August 1964 to incorporate. That vote failed 505 to 857.

That same year, the residents of the Boulevard Road area also voted to reject annexation to the City of Olympia.

In 1966, when Lacey was on its way to successfully incorporating, the original fire station on Boulevard Road was actually a Lacey Fire District 3 station. So, it made sense that the "Olympia fringe area" was included in the new city.

When Lacey finally successfully incorporated in November 1966, Olympia quickly struck back. In December, the residents in the western portion of Lacey, stretching from near North Thurston High School down to the south end of Boulevard Road, submitted a petition for incorporation into Olympia.

Now, this is where it gets weird. The city commission received the petition in a closed-door meeting. Using what was later described by Lacey's lawyers as an archaic law, the city commission scheduled an election that would allow not just the residents of the proposed annexation area to vote, but also the residents of the entire city. So, if the voters of the City of Olympia authorized the annexation of neighborhoods in another city, they were allowed to do so.

Lacey went ahead and scheduled a special election a few weeks later in February 1967 which would have allowed the area to de-annex from Lacey and return to the county. But, when Olympia voters passed their proposal for annexation in January, Lacey dropped their vote and sued to have the results of Olympia's vote invalidated.

The crux of the lawsuit apparently wasn't where I grew up, but rather the north end of the annexation area along Martin Way. 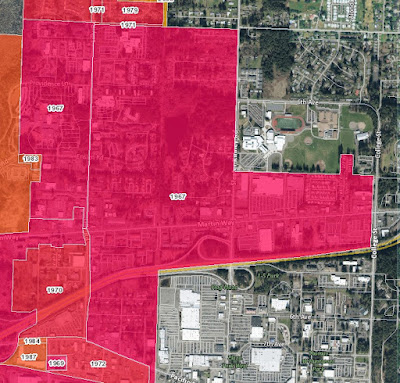 The City of Lacey's case was:
The courts, though, disagreed. It was true, the annexation law the City of Olympia was using hadn't been touched since 1890, and it was still a law. And, they also disagreed on the definition of contiguous. Either way, they left Lacey packing and let stand the massive annexation, and Olympia stretched all the way to College Street.
The state legislature would also step up in 1969 and reform the 70+ year old annexation law that Olympia used to gobble up my family homestead and surrounding property. The new law would lengthen deadlines, to allow for better public notice, and actually make it easier for two small cities to join together.
Which is funny because, already occurring in 1969 was the most interesting part of this entire annexation drama.
In 1969, the cities of Olympia and Lacey would vote to consolidate.
Before we get too far, the vote failed in both cities. But that there was even a vote exposes just how frail the existence of Lacey was in those early years. The measure was close all over Olympia, failing in 11 of 19 precincts and by fewer than 30 votes overall.
Even though it failed by a 3 to 1 margin in Lacey, two precincts representing Panorama City voted in favor. So if those areas west of Chambers Lake and south of Pacific Avenue had their choice, Olympia's annexations of 1964 and 1967 would have gone even further east more uniformly.

Good review. Lacey has suffered much with its relationship to Olympia. But times change and relationships flip