Somewhere back in the peak of the pandemic, there was a popular Facebook post here in Olympia that I thought was interesting. The post pointed at the signs distributed by Intercity Transit asking people to slow down. The social poster asked why we didn't have signs asking for people to stop committing other crimes.

The idea was that anti-social behavior, visible homelessness and property crime were much bigger issues in Olympia than speeding and injuries to pedestrians because of speeding. Since then, I've been poking around for a way to compare like-for-like, to be able to compare the two sides of the argument, or just to get an idea of the scope of traffic related deaths in Thurston County.

So, I have been playing around with pedestrian death data from the federal Department of Transportation and come up with a few broad conclusions:

A note on the data itself: most of this comes from the Fatality Analysis Reporting data from the USDOT. Other data I cobbled together from TRPC, the Thurston County Coroner's Office and WASPC. It is also worth noting that the FAR data I used only goes through 2020, but 2021 and 2022 saw record pedestrian deaths.

1. Pedestrian deaths and murders are in the same neighborhood

To get to the main premise of the now-lost social post itself, that we should pay closer attention to other crimes and not just pedestrians being killed by cars, I suppose the data carries that point. But when you consider the vast majority of murders (over 90 percent in 2017 for example) were committed by non-strangers, that puts deaths by pedestrians in traffic in another context.
When you kill someone with your car, there are a lot of reasons outside the generalized behavior of drivers and pedestrians. These include bad road design, lack of marked crosswalks, left turns and large, multilane roads.
Bad road design, lack of crosswalks and our dependence on so-called stroads seems to make pedestrian deaths a much bigger part of local government. Obviously, each homicidal (or man-slaughter or non-natural) death is one of importance for public policy. But, I think my reaction to the main premise of the now-lost social media post is that it is at best a wash.

2. September is the deadliest month

What is surprising here is that the winter months are lower altogether than summer months overall. You would imagine that more light would lead to fewer deaths. But, according to research on the temporal nature of pedestrian deaths, there are more car trips in the summer, which lead to more deaths.
3. Downtown Olympia, Old Lacey and Grand Mound
The most interesting part of the traffic data is that you can easily geocode it. Here is a map of all pedestrian deaths in Thurston County.
What you can see are a few clusters of activity:
Old Lacey/East Olympia: 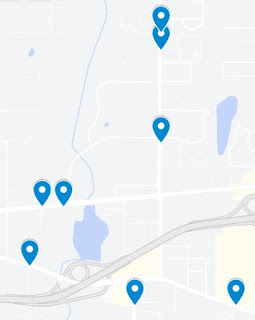 To summarize, Lilly Road north of Martin, Martin Road east of Lilly are both hotspots within the hotspot. But given the reasons for pedestrian deaths cited above, this area seems to be rate fairly high. But it is worth noting that there were more deaths here than in other places with the same characteristics, such as Yelm Highway or Hawks Prairie.
Downtown Olympia: 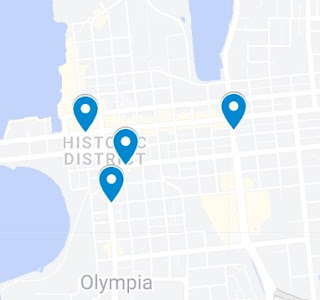 What is surprising here is that there aren't more deaths in downtown Olympia. State, Capital Way, Legion and Plum are all different sorts of thoroughfares. But, in terms of pedestrian density and the amount of traffic going through downtown, it could be easily assumed that there would be more here. Possibly, though, the infrastructure here is kinder to pedestrians, making it much more likely that drivers will be cued to notice them or drive slow enough to not kill them in the case of an accident.
Grand Mound: 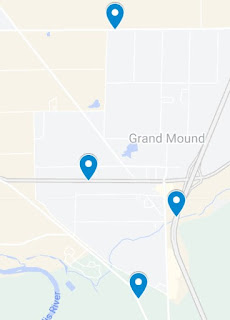 This was a surprise hot-spot to me. But, I am always surprised by Grand Mound, to be honest. There is a lot going on down there. It was years ago when I noticed that the census tracts that made up Grand Mound had the same population as Tumwater proper (not including the UGA). The kind of rural/not rural development here probably is dense enough to encourage some walking. But also, is low density enough not to encourage slow driving that would prevent pedestrian deaths.
Posted by Emmett at 1/01/2023 06:36:00 PM